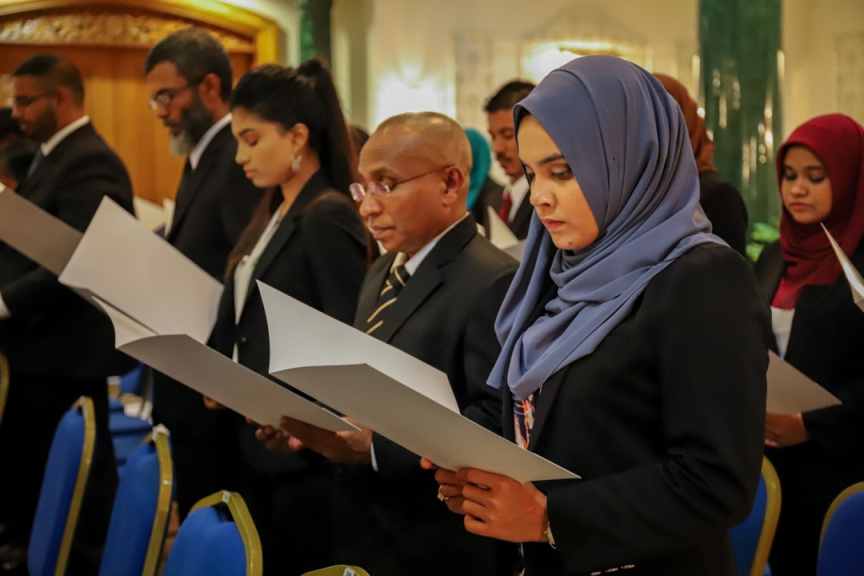 A Swear-in ceremony for attorneys. (Photo/DJA)

The Bar Council has gazzetted regulation to set the standards of issuing legal practice licenses and public notary services among other things.

The newly formed regulations state that applicants for a legal license would have to complete a bar exam and a training program before their licenses are issued. In the regulations, licenses are to be issued for individuals who are 21 years of age and fulfill the requirements specified by the Council such as a first degree in the legal field from a Bar Council accredited educational institution, in addition to completing the bar exam and training program.

The exam questions, answer scheme, exam dates, and arrangements will all be organized by the Executive Committee of the Bar Council. The regulation also stated that the bar exam must be held once every year and announced 90 days before the exam. The regulations also impose a training of one year at a council-approved workplace under a supervisor fulfilling certain requirements.

The applications for licenses will be decided by the Executive Committee based on the recommendation of the Licensing Committee. The regulation also stated that a decision must be reached within 30 days. Until the Bar Council forms the syllabus of first degrees in the legal field, degree program with the syllabus accredited by the Maldives Qualification Authority will be accepted as a first degree, according to the Regulations.The Regulations also stated that attestation stamps can only be issued by an attorney with a legal practice license.

The Regulations also included requirements for Public notaries. The permits for notaries will be issued by the Council and requires a legal license with three years of service in the legal field. The Bar Council will also keep a registry of Public Notaries.