Ali Waheed: Wealth misconceived by some as a crime 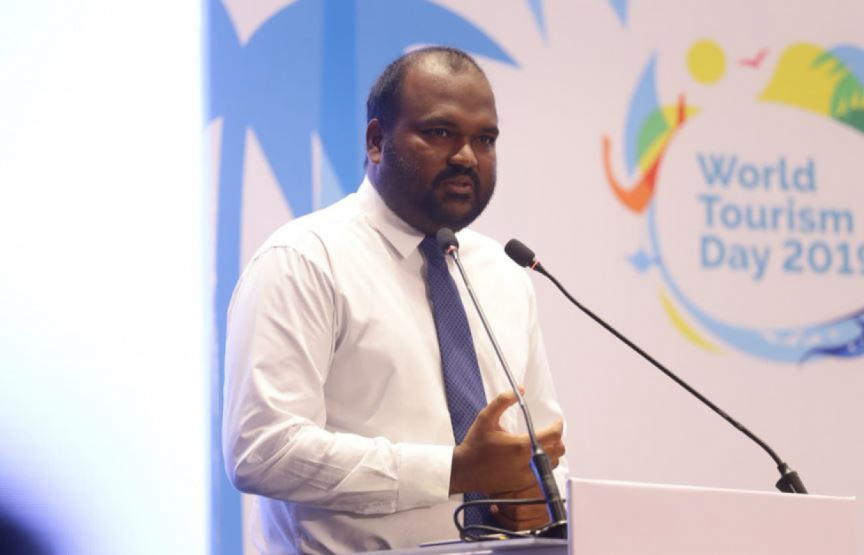 Tourism Minister Ali Waheed says that the Maldivian society had undergone a shift in perception leading to some labelling wealth and affluence as a crime.

He made the remark at the opening of the Maldives Tourism Conference 2019 hosted at Crossroads Maldives this Thursday.

Ali Waheed said that the current Maldivian administration, since assuming power, had visited each and every atoll, and met and exchanged views with local residents.

“When we go to some of the islands we are directly confronted with – what does tourism do? That a certain island is lacking an airport, that another island is lacking something else. Of what use we are. That the wealthy are of no use. The perception has shifted to the level affluence is conceived to be a crime,” said Ali Waheed.

He said that the perception was misguided, and that it was through the very strength of the tourism industry that employees of all other industries were remunerated.

He said that it was the pioneers of the tourism industry in the 1970s who must be credited with the development the Maldives has achieved over the past 47 years.

Maldives Tourism Conference 2019 is a gathering of hospitality industry stakeholders to discuss the challenges facing the industry and explore avenues for further development of the industry.

The conference, which is being partaken by over 200 stakeholders, will be held in four main sessions. The first of which is the closed-door session on Terrorism and Security in Global Tourism which will be partaken by officials from MNDF and the police, as well as security experts from the UK.

Stressing that terrorism was a global threat, Ali Waheed reiterated the Maldivian administration’s commitment to ensuring Maldives remains a safe haven and is untouched by terrorism.

Thee session of Terrorism and Security in Global Tourism will be followed by a session on Environment Protection and Sustainability, a session on Social Inclusiveness, Employment, and Poverty Reduction through Tourism, followed by artists’ sessions.

Ali Waheed has expressed hope the Maldives Tourism Conference proves to be a platform through which the Maldivian administration is able to present its policies for tourism industry development, obtain input from industry stakeholders regarding the policies, and make several crucial decisions.

Ali Waheed noted that only the conference was being held at state expenditure, and that all the other wide-array of celebrations held to mark World Tourism Day had been funded by the 30 or so companies which took part in the activities.