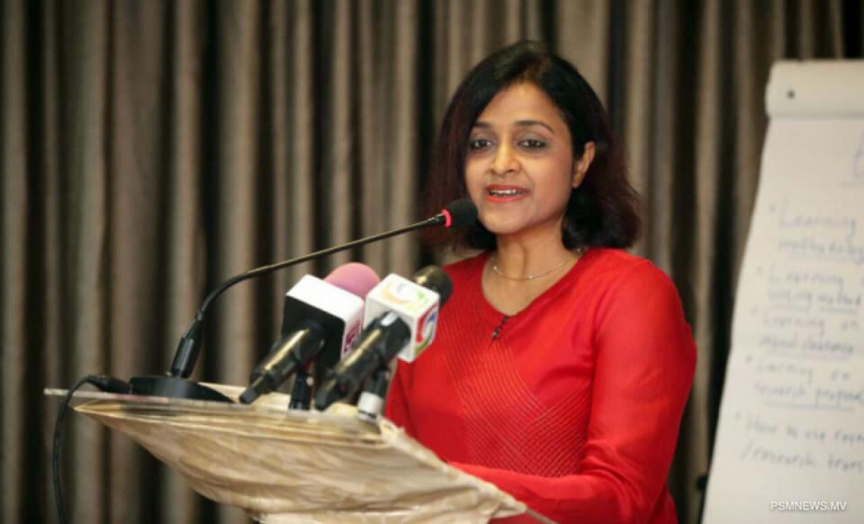 Former foreign minister Dunya Maumoon has voiced concern regarding slow pace of the appeal proceedings over the acquittal of the suspect in the fatal sexual assault on Ziyadha Naeem in 2015.

Ziyadha, 37, a resident of G. Dh. Thinadhoo, was brutally sexually assaulted and beaten on December 3, 2015. She succumbed to her injuries while under treatment at the intensive care unit of IGMH on December 28, 2015.

Her husband Ibrahim Shah, 40, who Ziyadha named as her assailant to doctors and nurses during her time at the hospital, was pressed with four charges following her death; marital rape, manslaughter, negligent homicide, and possession of pornographic material.

However, the Criminal Court found him not guilty on all charges and awarded him a full acquittal on March 21.

The court’s decision was promptly appealed with the High Court by the Prosecutor General’s Office, which in a statement, accused Judge Ibrahim Ali, who had presided over the case, of discounting witness testimony and evidence submitted by the prosecution.

It has been five months since the PG’s Office filed its appeal, and the case remains stymied at the High Court.

Addressing the issue, Dunya noted that the current Maldivian government had repeatedly declared its commitment to combatting violence against women, but expressed concern over the slow pace of appeal proceedings in the case.

She said that Ziyadha’s surviving family members were desperate for justice, and appealed to State authorities to expedite proceedings to deliver justice.

Months have passed & yet, we’ve been waiting for PG to move forward with Ziyadha’s case. The lack of action from the system is disheartening for the family, & women’s rights defenders! Unless perpetrators are punished, GBV victims will never feel protected. #JusticeForZiyadha pic.twitter.com/UzELr3R0Zn

She said that the slow pace of proceedings in such cases served to deliver the wrong message to the community.

“This is a message that men and family members can live with impunity after committing acts of violence against women. The community is made up of people of different characters, and the lack of priority to such cases serves as further encouragement to perpetrators of such crimes,” said Dunya.

Dunya said that expediting trial proceedings and delivering harsh sentences in cases of violence against women was crucial to discourage perpetrators of such crimes. She said that such cases should be talked about continuously, and that one day alone wasn’t enough to address such crimes.

“Ziyadha deserves justice. I call for the case to be expedited. Domestic violence needs to be looked into – especially by the government,” said Dunya.

She said that though the Maldivian community was much more aware of gender-based violence than it had been a few years ago, the country still had a long way to go before stopping such crimes altogether.

Dunya said that while acts of violence against women needed to be a put a stop to altogether, a reduction in such crimes was also a significant achievement.

Ziyadha had been sexually assaulted while the couple had been separated.