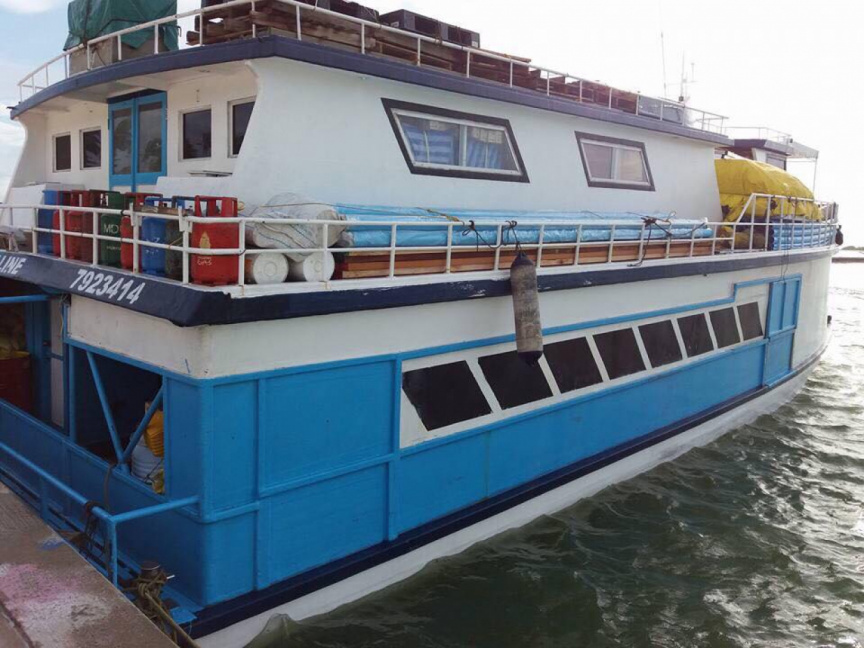 Best Line boat: A gas cylinder exploded on board the boat on September 11, 2019 injuring eight people.

Indhira Gandhi Memorial Hospital says that one of the men injured in the gas cylinder explosion onboard a boat on Wednesday is in critical condition with burns covering 80 percent of his body.

Eight people were injured in the gas cylinder explosion onboard Best Line boat, docked at the northern harbor in Male’, on Wednesday night.

A spokesperson from IGMH reported to Sun this Thursday that two of the people have been discharged after treatment, while six others remain hospitalized.

The spokesperson said that one of the patients, a migrant worker, is being treated at the Intensive Care Unit, and has burns covering 80 percent of his body.

“The condition of the patient remains very critical,” said the spokesperson.

Two other patients have burns covering 20-30 percent of their body and have been placed under isolation to prevent an infection.

“They are being kept isolated at a separate unit to prevent an infection. But they are otherwise stable,” said the spokesperson.

The spokesperson said that two of the remaining three patients will be discharged this Thursday.

IGMH reports that the patients brought in due to the explosion did not have any injuries other than burn injuries.

The explosion, which took place at approximately 7 pm last Wednesday, is under investigation by the police. Initial findings who a large quantity of cargo had been placed on top of the gas cylinders, and that total 83 gas cylinders had leaks, though only one had exploded.

Two injured in fire extinguisher explosion at a godown

2 sustain burns in explosion onboard boat in Hulhumale'