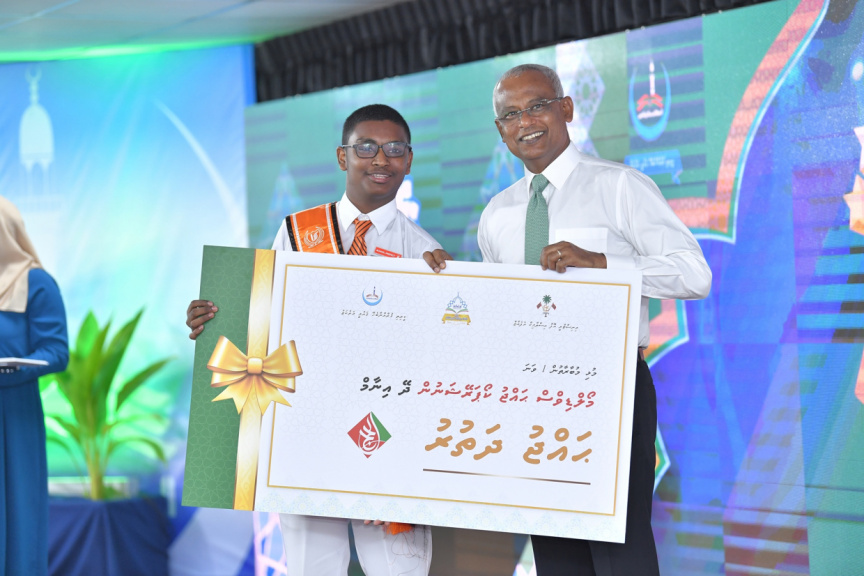 Mohamed Saaee Mubaarik, the winner of the 33rd National Quran Competition has been awarded a trip for the holy pilgrimage of Hajj to Mecca.

Saaee from Imaaduddine School won the competition that saw more than 1200 participants compete. Saaee was awarded the prizes at a ceremony last night by President Ibrahim Mohamed Solih.

A Hajj trip by the Hajj corporation and MVR 15,000 as the prize money was awarded to Saaee who also won return tickets to any destination within the Maldives by the National Airline, Maldivian.

Second place at the competition was taken by Mohamed Nabeeh Raashid from Islamic United for Asaas Vinavi and Iyaar. Third place was won by Mohamed Nabhaan from Dhauvaa Foundation.

The private institution's category was won by Islamic United for Asaas Vinavi and Iyaar. Trophies were also awarded to 15 individuals who won the honor of Hafiz last night. The competition has been held sine 1981.

'Can save 70M by combining council, parliamentary vote'