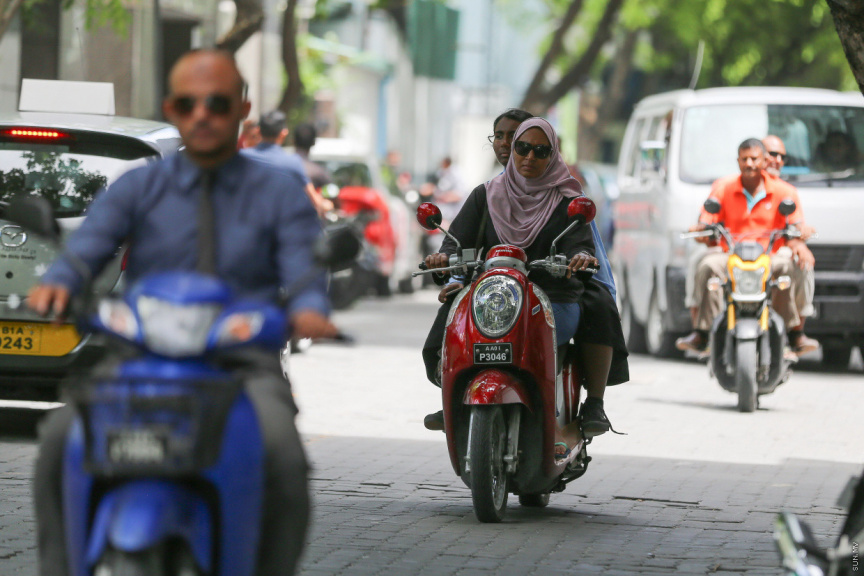 A woman drives along a street of Male' City on a motorcycle. (File Photo/Sun/Fayaz Moosa)

Speaking to Sun during its Nuvagadi press briefing session this Sunday, Deputy Transport Minister Hidhaya Naseer said the Transport Ministry has initiated work to join the Vienna Convention on Road Traffic – which will pave the path for local driver’s license to be internationally acceptable.

“Once Maldives joins the Road Traffic Convention, citizens can use Maldivian driver’s licenses in countries which are members of the convention. Once we join the convention, we will receive an international permit to operate vehicles in member countries. Popular destinations Singapore, Sri Lanka, India and Malaysia are all members of this convention,” said Hidhaya.

She said the Transport Ministry has asked for legal advice from the Attorney General regarding joining the convention.

“The most pressing challenge for Maldivians is the lack of membership in this convention. The solution to this challenge is to join the convention,” said Hidhaya.

Though Malaysia had previously allowed Maldivian citizens to operate vehicles in the country using the Maldivian driver’s license, the country had since annulled the concession in blanket regulatory reforms in January.

Transport Ministry reports the Maldivian Embassy in Malaysia is engaged in discussions with officials from the Malay government in order to remedy the inconvenience the regulatory reforms posed to the sizable Maldivian population which resides in the country.

“Negotiations are in progress for a remedy to the situation even before Maldives joins the convention,” said Hidhaya.

Ministry refuses to bow down to demands of taxi drivers