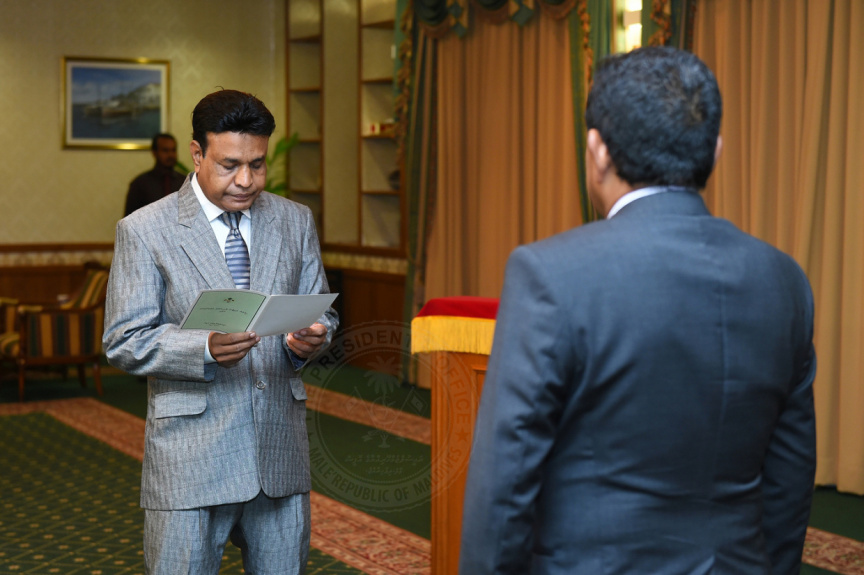 Moosa Ali Kaleyfaan being sworn in as a member of HRCM by the former president Abdulla Yameen. Moosa has been accused of a corruption scandal of MVR 24 million. (Photo/President's Office)

Parliamentarians have raised concern that a man accused of serious corruption allegations is now a member of the Human Rights Commission of the Maldives (HRCM).

The issue was raised by Hinnavaru MP Jeehaan Mahmoodh who stated that a member of the HRCM had been accused of a corruption scandal of MVR 24 million while working in the Disaster Management Center.

MP Jeehan was speaking about the amendments to be brought to the law regarding the Human Rights Commission when she raised her concerns. Although she did not name the member, she stated that the accused member's case had been sent to the Prosecutor General when the member was appointed to the HRCM.

"There is a member accused of a corruption scandal of MVR 24 million on the Human Rights Commission. This is not acceptable at all," said Jeehan.

MP Jeehan is speaking about Mr. Moosa Ali Kaleyfaan who was appointed to the HRCM on August 27, 2015, during former president Yameen's administration. He had served as the director-general of the Disaster Management Center from 2007 and 2010.

Jeehan stated that if such a person is on the HRCM it raises questions regarding the integrity of the commission. She also stated that a member accused of such allegations cannot serve the commission without any fear or prejudice.

MP for Mathiveri Hassan Zareer also shared the concerns of MP Imthiyas and MP Jeehan. MP Zareer stated that he could not comprehend how a member accused of such a scandal could work independently on the commission. He also stated that people with integrity and good behavior should be appointed to independent institutions for them to function properly