Nasheed hints BroadCom impeachment motion will be sent back to committee 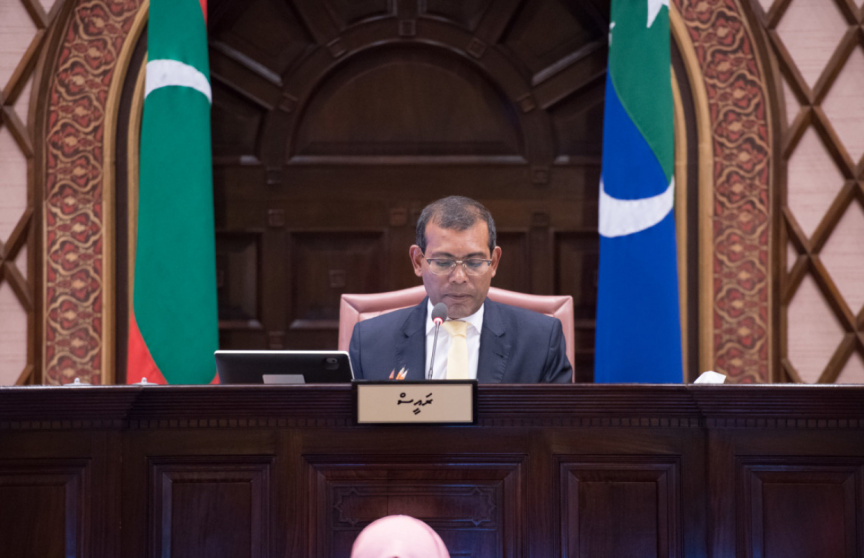 Speaker of Parliament, former President Mohamed Nasheed has indication he is considering sending the Independent Institutions Committee’s report which recommends the impeachment of the two top officials at Maldives Broadcasting Commission back to the committee for further evaluation.

Independent Institutions Committee voted to in favor of a parliamentary vote to impeach BroadCom’s president Mohamed Shaheeb and vice president Fathimath Zaina on July 24. But the vote was never scheduled.

Speaking at the Parliament this Thursday, Nasheed said he had kept the motion on hold over a concern regarding the procedure for the decision by the committee.

He reiterated his lack of confidence over the efficiency of the Parliament’s current procedure for appointment and dismissal of autonomous State officials and members of independent institutions.

He said the process was far too ‘ad hoc’.

“What happened here is, it was decided to investigate the execution of the legal duties of Broadcasting Commission’s members based on the information they provided at a meeting on June 19,” said Nasheed.

He said he discussed the issue with chairs of committees and political party leaders when the Parliament’s regulations had been under revision, and suggested forming a ‘super committee’ to decide appointment and dismissal of independent State officials.

He said he later discarded the suggestion due to its unpopularity among the parliamentarians.

“I find it will be useful to carry this out in accordance with that,” said Nasheed.

He said he will discuss the issue with parliamentary group leaders before deciding on whether to proceed with an impeachment vote, or send the motion back to the committee for further evaluation.

“I will discuss it with political leaders. I will decide on what to do with the report after that. In Sha Allah, I shall announce the decision at the next parliamentary sitting,” said Nasheed.

When questioned by the Independent Institutions Committee on June 19, BroadCom members accussed each other of wrongdoings, and admitted to attempts at influencing the commission’s decision by parliamentarians aligned with the former administration.

The committee decided at the time to impeach former VP Sofwan and current VP Zaina.

However, Sofwan resigned from the commission shortly after the committee’s decision to initiate impeachment proceedings, which was followed a few days later by the resignation of another commission member – Hassan Nabah.

Independent Institutions Committee then formed a sub-committee to investigate all BroadCom members, and questioned every member separately. It made its decision to impeach Shaheeb and Zaina after this investigation.

A large number of candidates have applied for the two vacancies at BroadCom with Sofwan and Nabah’s resignation. The names of the 36 candidates – some of whom include veteran journalists – were sent to the Parliament this week.