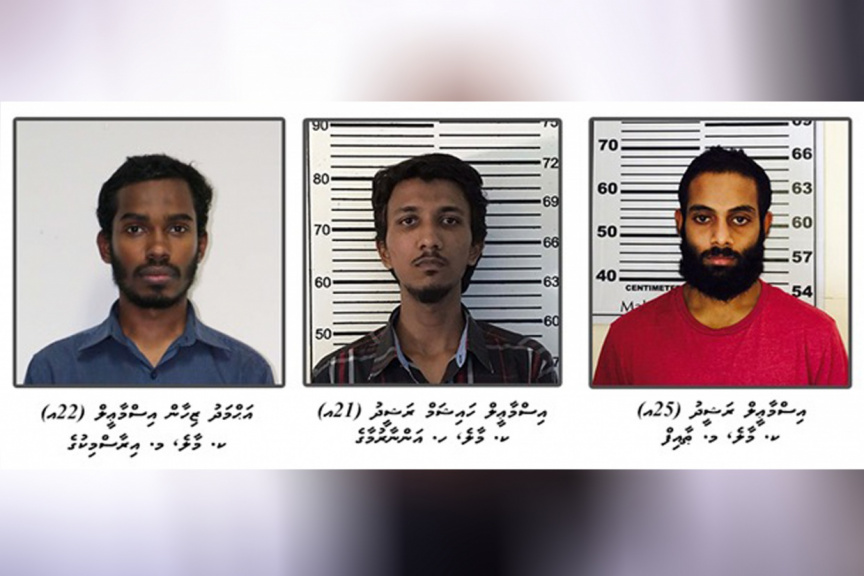 A State witness has testified to hearing the sounds of screams and seeing two of the defendants accused of murdering local human rights activist Yameen Rasheed exiting his residence the night of his murder.

Yameen Rasheed was found collapsed in the stairwell of his residence with multiple stab wounds on the night of April 22, 2017. He was pronounced dead moments after he was taken to the hospital.

Haisham and Zihan have been charged with premeditated murder, while Ismail has been charged as an accomplice.

The witness, whose identify is protected by the court, said that he went to the Maafannu Bisburu neighborhood where Yameen Rasheed used to reside to meet a friend sometime between 2:30 am and 3 am.

He testified that the sounds of screams drew him to M. Spatula – Yameen Rasheed’s residence. He said that two men rushed out of the residence almost simultaneously after the screams fell silent.

He said that he saw the two men at a distance of two to three feet.

The witness also places the third defendant, Ismail Rasheed from M. Thaaif, outside Yameen Rasheed’s residence on the night of his murder.

He testified that Ismail had been waiting on a motorcycle outside Yameen Rasheed’s residence, and that he drove Haisham away from the scene of the crime on the back of his motorcycle, while Zihan drove away on a motorcycle parked near the residence.

The witness said the two men he saw rushing out of Yameen Rasheed’s residence were wearing surgical masks which covered their mouths, but that he was sure they were Haisham and Zihan.

Suring cross-examination, Zihan’s attorney asked the witness how he could be sure of their identity if they had been wearing masks.

The witness responded that he saw them close enough to identify them, and added that he identified the defendants from a photo lineup presented by police investigators – when pressed further by Ismail Rasheed’s attorney, Maumoon Hameed.

He said he left the area soon after the defendants fled, and did not report what he saw to the police at the time.

The court also heard testimony from an anonymous witness who entered and exited M. Spatula on the night of the murder.

The witness testified he exited the building at 2 am and re-entered at 2:30 am. When asked to describe what he saw, the witness said he noticed the lights on the ground floor stairwell had been switched off.

The State prosecutor clarified the witness was presented to testify to seeing a pair of feet sticking out from under the stairs.

Judge Ali Rasheed Hussain adjourned the hearing after announcing the next hearing will be held on August 21. The State is set to present more witness testimony during the hearing.

President: Internet rates should be affordable to all