Kalhuvakaru mosque to be managed by private company for MVR 2.9 million 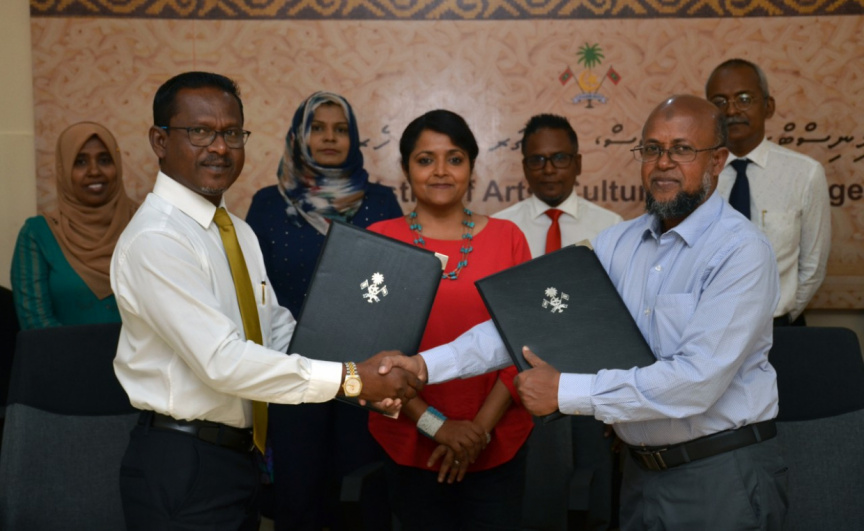 From the ceremony on agreement to renovate the Kalhuvakaru Mosque. (Photo/Ministry of Heritage)

The agreement to manage the mosque was signed by Heritage Minister Ahmed Thoriq and CEO of Aman Maldives Pvt Ltd Ibrahim Muhthalib today at a ceremony held at the ministry. The project scheduled to be completed within 120 days was awarded to the company for MVR 2.97 million.

The company will be conducting civil works at the mosque under this agreement. These works include:

1) Building the wall of the mosque and constructing the foundation of the well.

2) Building a wall on the outskirts of the mosque area.

3) Landscaping work in the mosque area.

4) Constructing the pavement and outdoor exhibition area of the mosque under the landscape plan.

It was one of President Ibrahim Mohamed Solih's 100-day pledges to bring back the mosque that the previous administration had dsimantled. The current government had discovered different parts of the mosque stored inside the National Museum.

The previous administration had received a lot of criticism when it decided to remove the mosque from its original location and build a winter park there. The decision to move the mosque to the location of the previous head office of Dhiraagu was also met with heavy criticism from the public and by Islamic scholars who stated that it was not a good idea to relocate a mosque in front of another mosque.

The previous administration had responded that even though the mosque was relocated to the location of the previous Dhiraagu Head Office, calls for prayer would not be announced from the mosque and that anyone can still use the mosque for prayers.