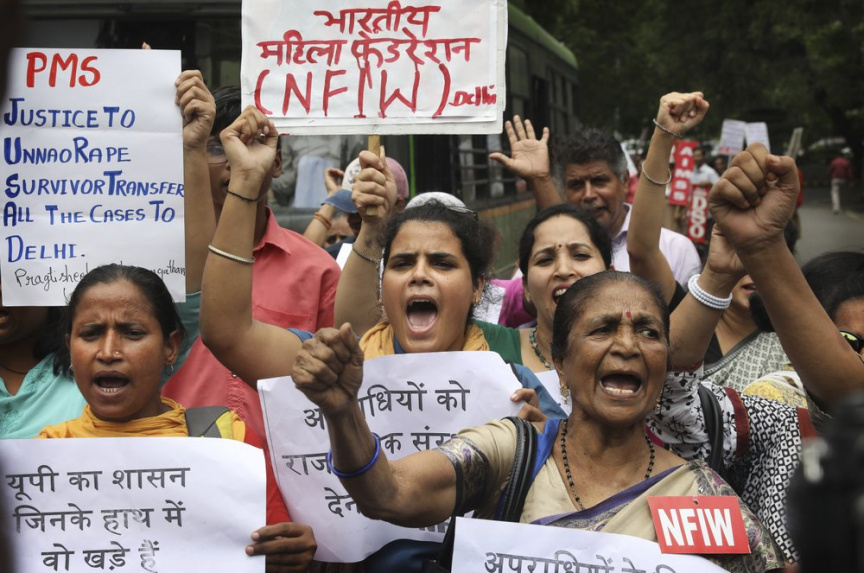 Women activists shout slogans during a protest demanding a fast-track probe into a highway accident that critically injured a woman who has accused a ruling Bharatiya Janta Party lawmaker of rape that led to his arrest last year, outside Uttar Pradesh House in New Delhi, India, Tuesday, July 30, 2019. (AP Photo/Manish Swarup)

NEW DELHI (AP) — Protesters took to the streets of India’s capital on Tuesday demanding a fast-track probe into a highway crash that killed two people and seriously injured two others, including a woman who has accused a ruling party lawmaker of rape.

Opposition parties and women’s organizations claimed that the weekend crash was an attempt on the woman’s life by Bharatiya Janata Party lawmaker Kuldeep Senegar’s supporters to weaken the rape case against him.

Senegar is in jail awaiting trial and could not be reached for comment, but has previously denied the rape accusation.

The woman’s car was hit by a truck in northern Uttar Pradesh state on Sunday. Two of her aunts were killed and her lawyer was seriously injured. Police arrested the truck’s driver and owner.

The state police first described it as an accident. On Monday, it registered a criminal case on a complaint by the woman’s family and recommended a probe by the Central Bureau of Investigation, India’s FBI, said Awanish Awasthy, a state government spokesman.

On Tuesday, the Congress and other opposition parties raised the issue in Parliament claiming a nexus between the politicians, criminals and the police.

Priyanka Gandhi, a Congress party general secretary, tweeted: “Why do we give people like Kuldeep Senegar the strength and protection of political power and abandon their victims to battle for their lives alone?”

The state BJP president, Swatantra Dev Singh, said Tuesday that Senegar had already been suspended from the party and that the road crash would be investigated by the Central Bureau of Investigation.

Senegar was arrested in March last year, but the court trial was yet to begin in the case, they said. Senegar denied the allegation at the time of his arrest.

Violent crimes against women have been on the rise in India despite tough laws enacted in 2013.

In 2012, the fatal gang rape of a young woman in the heart of New Delhi prompted hundreds of thousands of Indians to take to the streets to demand stricter rape laws.

The outrage over the New Delhi attack spurred quick action on legislation doubling prison terms for rapists to 20 years and criminalizing voyeurism, stalking and the trafficking of women. Indian lawmakers also voted to lower to 16 from 18 the age at which a person can be tried as an adult for heinous crimes.