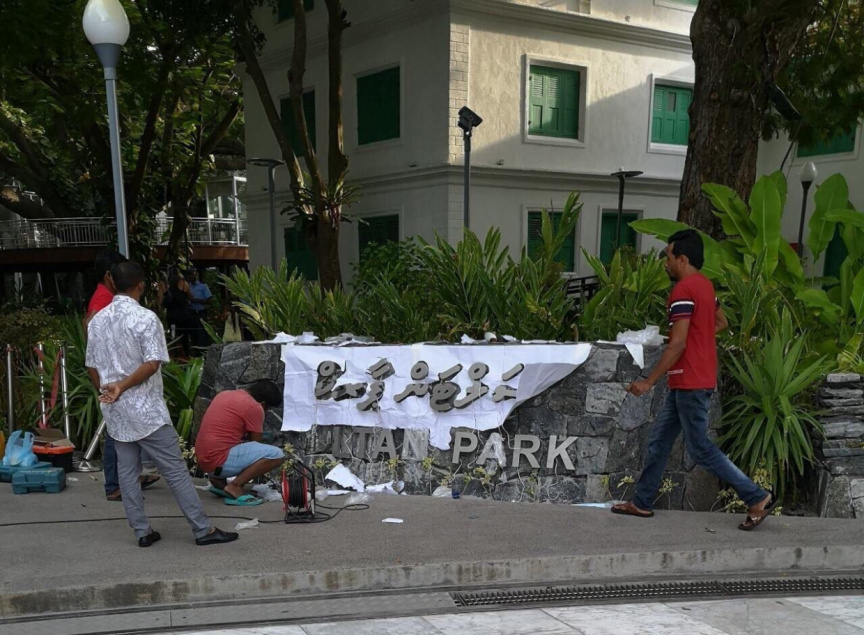 Former Housing Minister Dr. Mohamed Muizzu has expressed irritation over the decision of the current administration to revert the name of Rasrani Bageecha – so renamed in a project to modernize and redevelop the public park by the former administration – back to Sultan’s Park.

The public park located in capital, Male' City, was re-opened as Rasrani Bageecha in 2017. The decision to rename the national landmark was widely opposed by the politicians who are currently in power.

With the change in the administration and full reversion of powers which were restricted to local councils during the former administration, the Male’ City Council announced the decision to revert the name of Rasrani Bageecha back to its original name – Sultan’s Park.

The council, though it made the decision to revert the name to Sultan’s Park earlier this year, only recently began work on changing the large name post at the entrance of the park.

The task was delayed due to budgetary constraints, reports deputy mayor Shamau Shareef.

Former Housing Minister Dr. Muizzu has taken to Twitter to express his irritation over the decision to revert the name back to Sultan’s Park.

“We made it a point to name the places we developed as Maldivian, and as historically significant as possible,” said Muizzu.

He said that Rasrani Bageecha, Rasfannu, and Hi’than Maizan all evoked Maldivian history and tradition. “But what I see now is them lazily tampering with language and history,” said Muizzu.

Sultan’s Park was developed and opened as a public park on the grounds of the former Maldivian presidential palace by former President Ibrahim Nasir Rannabandeyri Kilegefaanuafter after the end of the monarchy system of governance in 1968.

The park’s name remained unchanged for nearly 50 years until the park was modernized, redeveloped and renamed as Rasrani Bageecha by former President Abdulla Yameen Abdul Gayoom’s administration on August 21, 2017.