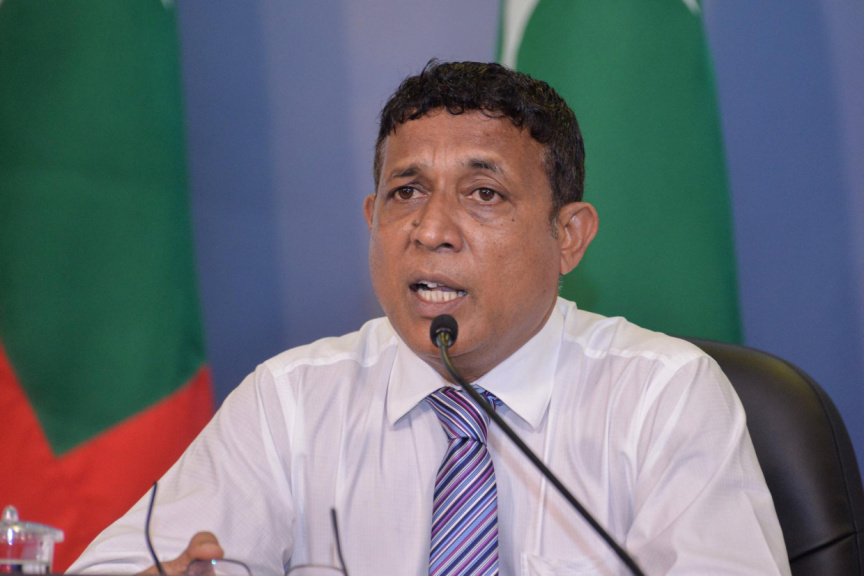 Minister of National Planning and Infrastructure, Mohamed Aslam speaks at a press conference held at the President's Office on July 21, 2019. (Photo/Sun/Ahmed Awshan Ilyas)

Minister Aslam made the remark in response to a question by Sun regarding lack of execution of major infrastructure development projects at a press briefing held by National Planning and Infrastructure Ministry at the President’s Office this Sunday.

“There’s not much money currently left over in the budget to award the remaining projects. There may be amounts for a large number of islands, but there isn’t money for other projects,” said Aslam.

Aslam said the government had never failed to attend to a major project it had sufficient finance for, and has awarded MVR 1.1 billion worth of projects so far this year. They include harbor development projects, water and sanitation projects, land reclamation projects and coastal protection projects.

He said the government was prioritizing projects based on the money left in the budget, and planned on executing the projects throughout the year.

“After an assessment of the money in the budget and at which period of the year the work can begin, we began projects which had the most money allocated towards and for which a sufficient budget was allocated for full completion of the project at the beginning of the year. We plan on executing the projects which had the least amount of money allocated towards later in the year,” said Aslam.

He said the government had the decision to prevent any projects from having to be suspended halfway through due to insufficient budget.

“There are MVR 1.3 billion worth of projects declared in the budget. 36 of the projects have now been awarded,” said Aslam.

He said that several of the projects were under budgeted and allocated as low as MVR 1 million.

“It cannot even cover the advance payment,” said Aslam.

Aslam pointed out that the current government assumed office after the MVR 30 billion State budget for 2019 was already drafted and passed by the previous government.

He said the government was also awarding planning and design work for projects based on the budget.

Other allocations include MVR 39.85 million for the development of an airport in M. Atoll, and just MVR 500,000 for surveys to develop an airport in H. Dh. Makunudhoo.

The government also recently posted tender for a consultancy firm for development of commercial harbors in Northern and Southern Maldives.