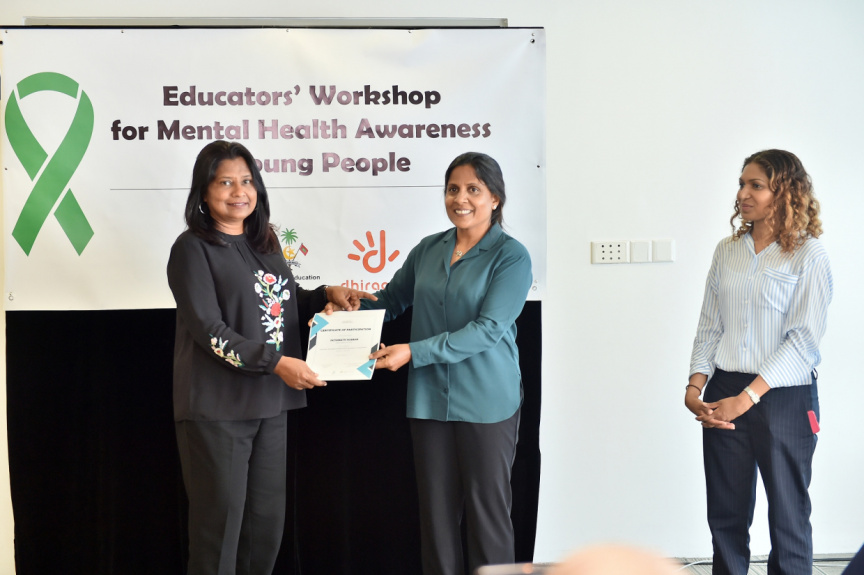 First Lady Fazna Ahmed has highlighted the importance of establishing an environment and culture in the Maldives that gives mental wellbeing the same emphasis given to physical wellbeing and allows the discussion of psychological disorders.

Speaking at the event, the First Lady stated that initiatives and workshops such as those were essential in promoting mental health awareness and helping to decrease the stigma associated with mental illness. She stated the need to create a culture where mental health issues can be discussed, as this would help in recognizing the importance of mental wellness and seek treatment for any concerns without hesitation.

The First Lady also stated that the adolescent and upcoming generation has seen massive lifestyle changes and stressed that this is the time when school-based mental health services regarding psychological issues are most important. The First Lady conveyed on the multiple roles that educators can play when it comes to aiding and assisting students suffering from psychological issues. She stated that it is important to not focus on academic goals solely but also to understand that a mentally healthy student is imperative for success.

Organizing medical assistance for psychological disorders was a presidential pledge that was a part of the government's 'First 100 days’ pledges and includes providing treatment plans with full support for mental health patients. The administration has previously inaugurated the Maldives’ National Mental Health Institute as part of the government's 'First 100 days’ pledges. The administration also expanded Aasandha coverage to include treatment and medicine for mental health patients.