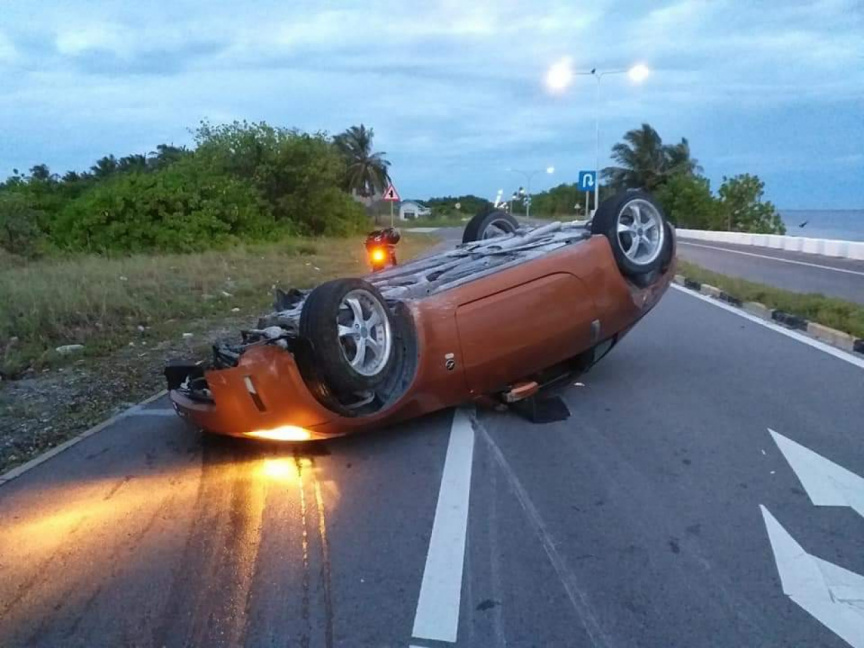 A car lays overturned in an accident over the L. Fonadhoo causeway on June 30, 2019. (Photo/Ismail Nasheed)

Extensive damages have been reported to a car involved in a crash on the causeway of L. Fonadhoo this Sunday.

Maldives Police Service reports the accident took place at approximately 6:35 am when a car headed from Kadhdhoo to Fonadhoo crashed on the concretes placed on the Eastern side of the causeway.

The car had overturned and skidded to a 300-foot distance before coming to a stop.

Photos of the car sent to ‘Sun’ show extensive damages to the vehicle.

There were two people onboard on the car when the accident took place; a 25-year-old male who was behind the wheels and a passenger – none of whom sustained any injury.

The accident also resulted in damages to the causeway. Five concrete blocks on the Eastern side were dislodged – three of which fell into the sea, and the road divider now has a three-foot crack.

Windstorm leaves destruction in its wake in Fonadhoo

L. Atoll to be developed as an economic hub