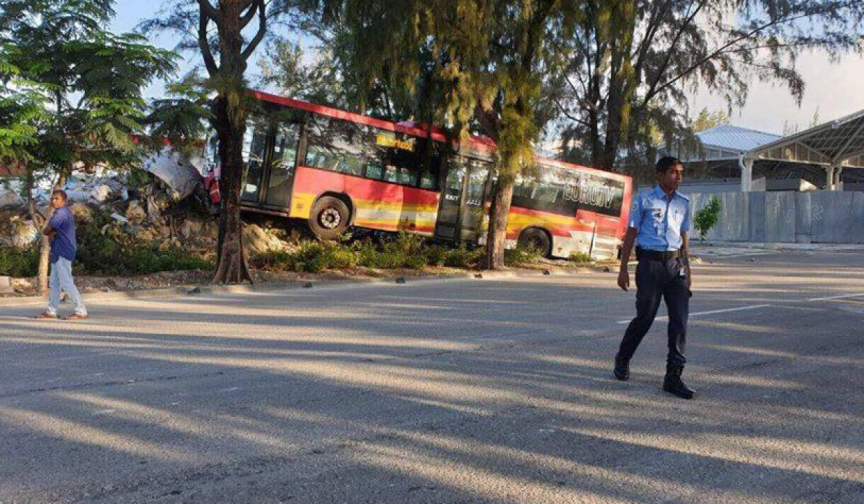 Public bus involved in the fatal roadside accident in Hulhumale' on May 6, 2019.

The family of the victim of the bus accident which took place in Hulhumale’ on May 6 will depart for their home country Ukraine with the body this Monday, says Maldives Police Service.

Maldives Police Service confirms the family has completed the necessary formalities, and that the agency will be releasing the body of the accident victim for return home to Ukraine with the family this Monday.

The accident victim, identified as a 31-year-old Ukrainian woman, had been walking along a street in Hulhumale’ when she was hit and run over by a bus.

The bus driver, employed by Maldives Transport and Contracting Company (MTCC), had dozed off behind the wheels.

CEO of MTCC, Hassan Shah reports the company will be bearing all the travel expenses pertaining to the family’s return to Ukraine.

MTCC has been under heavy criticism – which intensified after second accident took place less than three days later, on May 9, when a bus driver again fell asleep behind the wheels and crashed into a parked taxi car and motorcycle.

CEO Shah has refuted allegations the accidents were a result of sleep deprivation and exhaustion due to overwork. He says that the working conditions of bus drivers are favorable, and that though the official working hours of a bus driver may be eight hours, they drove only a maximum of five hours and spent the remaining hours refueling and doing maintenance work.

Following the accidents, MTCC launched an awareness program for its bus drivers to re-familiarize them with traffic laws and regulations as well as road safety measures, it also says that it will install CCTV cameras inside buses and is currently verifying criminal records and licenses of its bus drivers as well as monitoring how they spend their off-duty hours.