Cyclone Fani kills at least 15 as it moves to Bangladesh 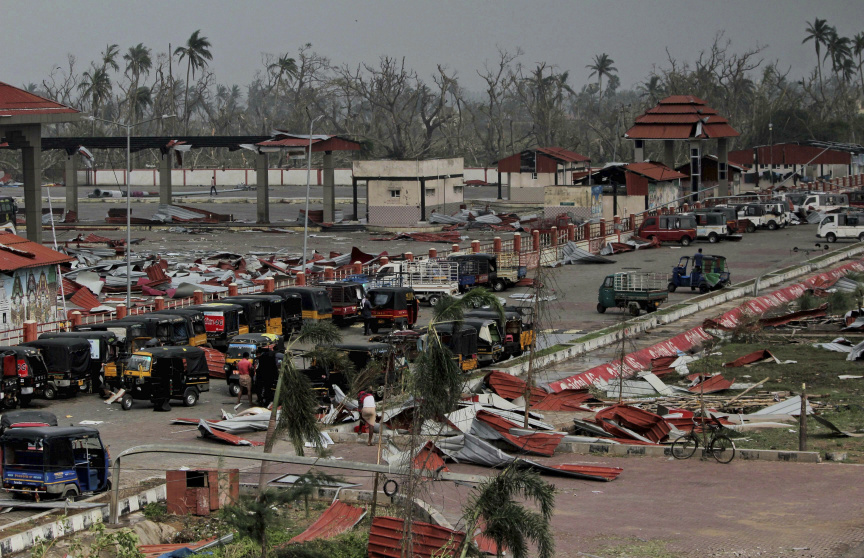 Corrugated sheets used as roofing lie scattered after Cyclone Fani made landfall in the area in Penthakata fishing village of Puri, in the eastern Indian state of Orissa, Saturday, May 4, 2019. (AP Photo)

DHAKA, Bangladesh (AP) — A mammoth preparation exercise that included the evacuation of more than 1 million people appears to have spared India a devastating death toll from one of the biggest storms in decades, though the full extent of the damage was yet to be known, officials said Saturday.

Cyclone Fani packed winds of 250 kilometers (155 miles) per hour when it made landfall in eastern Odisha state on Friday, equivalent in strength to a Category 4 hurricane, said Mohammad Heidarzadei, an expert on cyclones at Brunel University of London.

As of late Saturday, India's National Disaster Response Force director S.N. Pradhan said three people had been killed, though the storm smashed thatched-roof huts, uprooted trees and power lines, ripped the roof off a medical college and sprayed the emptied coastline with debris.

"The precautions that have been taken should be continued," Pradhan said.

Officials cautioned that the death toll could rise as communications were restored.

Fani crossed over India's West Bengal state and moved northeast toward Bangladesh on Saturday, weakening from a severe cyclonic storm to a cyclonic storm.

However, the death toll had not increased by Saturday afternoon, suggesting effective preparedness in Bangladesh as well.

Bad weather from the storm system was projected to affect around 100 million people in South Asia, from India's distant Andaman Islands to Mount Everest in Nepal.

The relatively low casualty count demonstrates much improved disaster readiness in India since 1999, when a "super" cyclone killed around 10,000 people and devastated large parts of Odisha.

"In the event of such a major calamity like this — where Odisha was hit by close to a super-cyclone — instead of being a tragedy of humongous proportion, we are in the process of restoring critical infrastructure. That is the transformation that Odisha has had," the state's top government official, Naveen Patnaik, said in a statement.

Pravat Ranjan Mohapatra, the deputy relief commissioner at Odisha's emergency center, said his phone line and internet were down for most of Saturday.

"Earlier we were not able to connect with authorities for infrastructure damage, how many houses are damaged or how many people have died or were injured," he said.

According to the Press Trust of India, one victim was a teenager killed by a falling tree in the district of Puri, a popular tourist area in Odisha. Another woman was killed while fetching water when she was struck by flying debris loosened from a concrete structure.

Another woman, age 65, died after a suspected heart attack at a cyclone shelter, PTI reported.

UN: Deaths of Bangladeshi migrants should be probed

At least 24 dead in Bangladesh from tropical storm