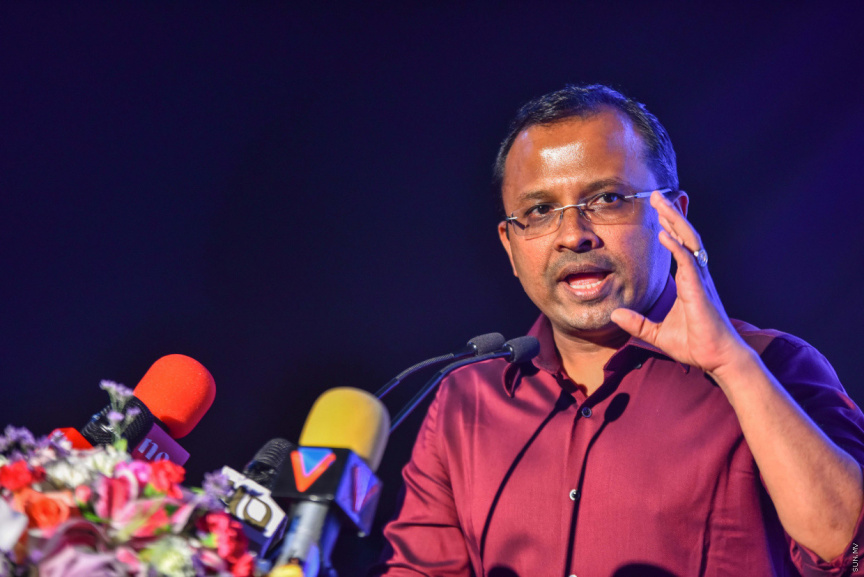 Only the Leader of Jumhoory Party (JP), Qasim Ibrahim had campaigned for the party during the parliamentary election and not any of the others at the party’s leadership, says Kinbidhoo MP Abdulla Riyaz.

In an interview to Public Service Media (PSM) last Friday, Riyaz – who is now MP-elect of Thimarafushi – spoke about the reasons which contributed to JP’s poor performance at the parliamentary election on April 6.

He remarked that only Qasim had campaigned to the party during the election.

“From within Jumhoory Party’s leadership, I saw only Jumhoory Party’s Leader as having made any effort to campaign for the party. I saw no one else, except for him, having made any effort to win the aforementioned 41 seats; whether it is this party’s members at the Cabinet, or anyone else in any [leadership] position within the party,” said Riyaz.

He conceded that some members of the party’s leadership had taken part in a handful of campaign tours.

He noted that Vice President Faisal Naseem, Minister of Tourism Ali Waheed, and Minister of Communication, Science and Technology Mohamed Maleeh Jamaal had attended his campaign events; but expressed displeasure JP’s leadership failed to campaign for many of its other parliamentary candidates.

Riyaz said that multiple factors had contributed to JP’s failure in the parliamentary election, including lack of sufficient preparation.

“We were unable to get properly organized. We had to wait until the last minute until the Maldivian administration made a decision on certain things,” said Riyaz.

He also spoke about JP’s decision to align itself with opposition parties Progressive Party of Maldives and People’s National Congress for the election.

Riyaz said PPM and PNC had failed to honor its coalition agreement with JP, and had not campaigned for the JP candidates it endorsed, but had campaigned against them.

“I did not see PPM’s leadership as having honored it [the coalition agreement],” said Riyaz.

He alleged that Leader of PPM and former Maldivian President Abdulla Yameen Abdul Gayoom had campaigned against JP’s candidates – specifically himself.

“Even PPM’s top leader, the top president himself. I know President Yameen himself worked against us,” said Riyaz.

He said that Qasim made the decision to align JP with PPM and PNC for the election because he felt it the best method to secure as many parliamentary seats as possible for JP at the time.

Ruling party, Maldivian Democratic Party (MDP) had won 65 out of the 87 seats at the Parliament. PPM and PNC had won 8 seats, and JP had won 5 seats.