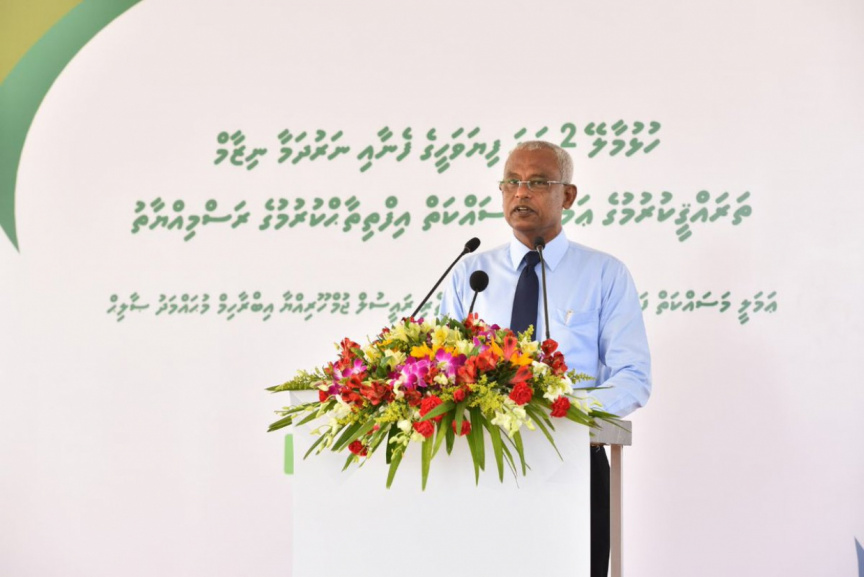 The people of Maldives must pay as much attention to environmental protection as they pay to their personal health and wellbeing, says President Ibrahim Mohamed Solih.

Speaking during the groundbreaking ceremony of the water and sanitation project at Hulhumale Phase II this Thursday morning, Solih urged Maldivians to use clean and safe tap water produced by Male’ Water and Sewerage Company (MWSC) for drinking instead of purchasing costly mineral water which are packed in plastic bottles.

He stressed that using tap water for drinking was both cost effective and will help reduce use of single-use plastics.

He said that Phase II of the Hulhumale’ Development Project is designed to accommodate 160,000 people. And promised water and sanitation services to all residents by the time the reclaimed land is populated by end of 2020.

“Therefore, the water and sanitation project here is the biggest such project ever by MWSC,” said Solih.

He also said that all of the project’s expenses will fall within the budget allocated by the State.

“Credit facility for all acquisitions needed for the project has been arranged from the Hitachi Capital of Japan. Additional expenditure will be borne by MWSC itself,” said Solih.

Solih said that such infrastructure development projects serve additional purposes than its main purpose of providing basic services; such as reducing consumer expenditure on drinking water and reducing use of single-use plastics.

President Solih, during his address to the Parliament in February, announced that his administration’s policy was to provide basic services to all Maldivian islands irrespective of size of the population or any other discriminatory factors.

The water and sanitation project in Hulhumale’ Phase II is worth USD 15 million.

Group from Commonwealth in Maldives to observe election