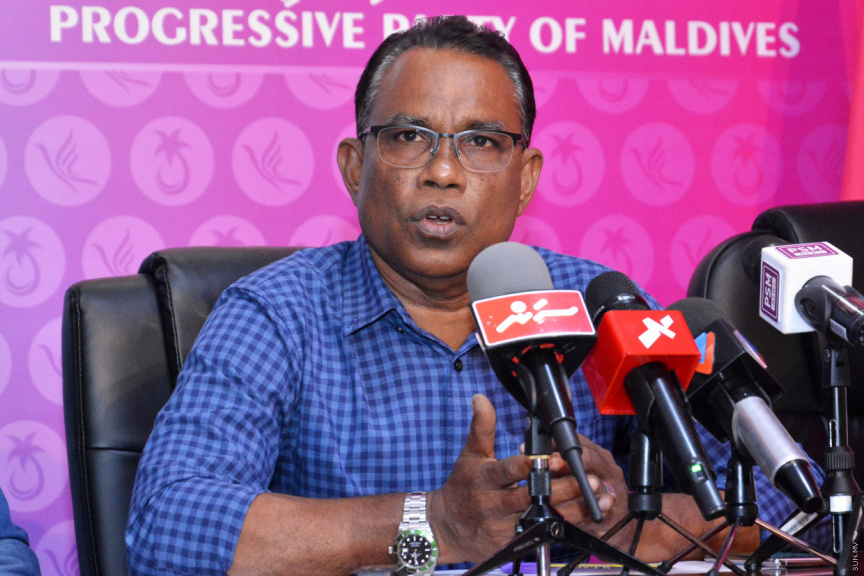 The opposition, Progressive Congress Coalition, is concerned by news the Commission on Corruption and Asset Recovery is getting ready to release a “list of supposed recipients of cash embezzled from Maldives Marketing and Public Relations Corporation (MMPRC)”, says Interim Leader of People’s National Congress (PNC), Abdul Raheem Abdulla (Adhurey).

President Ibrahim Mohamed Solih established the Commission on Corruption and Asset Recovery in less than 24 hours since assuming office on November 17, 2018.

The biggest cases in its mandate is the MMPRC graft case – which is also the biggest graft case to hit Maldives in recent history.

At a joint press conference held by Progressive Party of Maldives (PPM) and PNC this Tuesday, Abdul Raheem warned that the list which the presidential commission is getting ready to release is an attempt by the State to influence the results of the upcoming parliamentary elections.

“[I have received information the presidential commission] is preparing to publicly release a list of supposed recipients of cash from MMPRC. This is a huge travesty. They are blatantly trying to influence the results of the elections,” said Abdul Raheem.

When asked by ‘Sun’ why the list is a cause for concern to the Progressive Congress Coalition, Abdul Raheem responded that a presidential commission could release a list made up of whichever names it wanted. He said the commission was going to release the list ahead of the elections to discredit opposition candidates.

“Many of the people who carried out this travesty have been turned to State witnesses. Releasing a huge list in exchange for immunity to them is an attempt to influence the elections,” said Abdul Raheem.

“How are they to prove it? For example, that funds from MMPRC went to me or [Naifaru MP Ahmed] Shiyam? Isn’t it just hearsay? You have the list of people deposited money by SOF [Private Limited]. None of us are on it. But they want to release a list of 80 or so people – including us,” he added.

Abdul Raheem said he was informed the list would include former President and Leader of PPM, Abdulla Yameen Abdul Gayoom, former First Lady Fathimath Ibrahim, and a large number of their supporters.

He said that the list was being released secure a majority at the Parliament for main ruling party, Maldivian Democratic Party (MDP), and ensure the implementation of its legislative agenda, Agenda 19, “out of fear of failure to secure Parliament majority”.

He said that the Prosecutor General, Aishath Bisham and Auditor General, Hassan Ziyath were currently abroad in UK to carry out discussions ahead of the list’s release.

Abdul Raheem, during the press conference, also expressed concern over Yameen’s arrest and the delay in release of funds allocated to PPM by the Elections Commission (EC).

He warned that the party was ready to sue EC if necessary.

Adhurey: Will contest for Speaker if Maseeh impeached