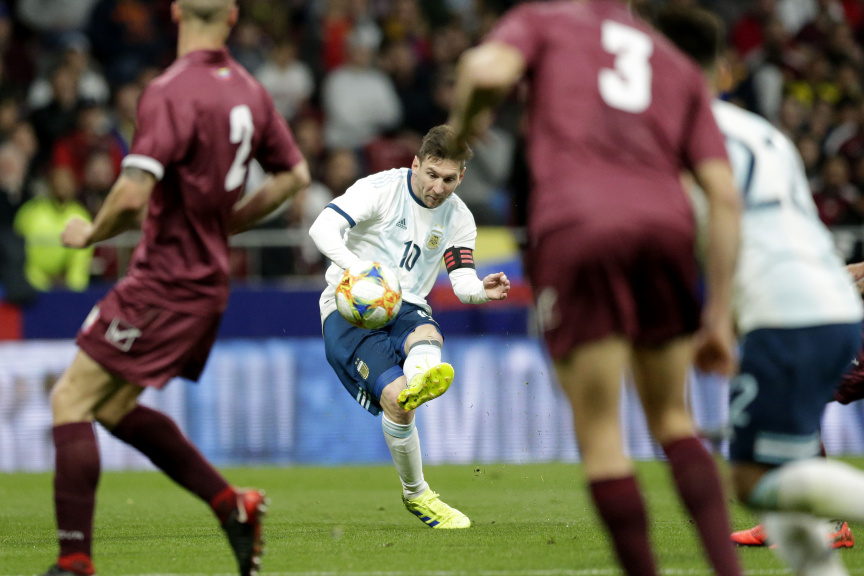 Messi was back on Friday for the first time since the 2018 World Cup but couldn't stop his team losing 3-1 to Venezuela in a friendly.

Messi hadn't played an international since the 4-3 loss to France in the round of 16 at the World Cup in Russia.

"He played a good game" Argentina coach Lionel Scaloni said. "The chances we created were thanks to him."

Messi showed his usual deft skills and his long-range shot in the 38th minute was headed for the top corner until Venezuela goalkeeper Wuilker Farinez Aray tipped the ball over the crossbar.

Messi helped set up Argentina's 58th-minute goal with a pass to Giovani Lo Celso, who eventually fed Martinez inside the area.

Venezuela had opened the scoring in the fifth minute when Rondon ran on to a long pass into the penalty area and sent a right-footed shot beyond goalkeeper Franco Armani.

Murillo made it 2-0 just before halftime by curling the ball away from Armani just inside the far post.

Venezuela's fast counterattacks were a nightmare for Argentina throughout and Martinez sealed victory by converting a 75th-minute penalty.

"It's satisfying to earn a victory against a team like Argentina," Venezuela coach Rafael Dudamel said.

Dudamel surprisingly offered his resignation after the match. He told a news conference he was not happy about the political use of a visit by a government official before Friday's game in Madrid, and said his future would be decided in talks with federation officials in the coming days.

The last time Argentina played at the Metropolitano it lost 6-1 to Spain in a World Cup warmup in 2018.

Argentina will play another friendly on Tuesday against Morocco in Tangier. Scaloni said he hadn't decided whether Messi would play in that game.

The Copa America will be held in Brazil in June.

Venezuela on Monday plays a Catalunya team that is expected to include former Spain players Gerard Pique and Xavi Hernandez.