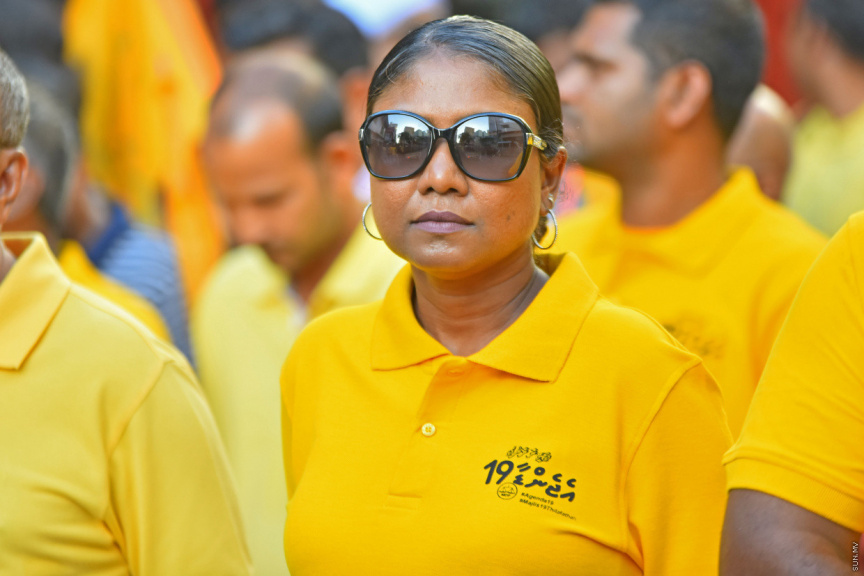 Leading attorney and Maldivian Democratic Party (MDP)’s parliamentary candidate for B. Thulhaadhoo, Hisaan Hussain has issued a statement denying the allegation she abused a group of students via her campaign office.

A member of the general public has submitted a letter to the President’s Office alleging Hisaan abused a group of students. The letter details the alleged abuse to the students and adds that a report over was filed with Maldives Police Service.

Hisaan’s campaign office has issued a categorical denial of the allegation.

The office wrote in a statement that the information in the letter is false, that no report has been filed against her with the MPS, and that she has never abused anyone – child or adult.

“Hisaan has never displayed any abusive behavior towards anyone, and never will. And as had become evident to the entire population over the past years, she is a human rights advocate and champions protection of human rights,” wrote the office in its statement.

The office has alleged the letter sent to the President’s Office is an attempt at slander instigated by Hisaan’s rival for the B. Thulhaadhoo seat – Maldives Reform Movement (MRM)’s candidate, Ibrahim Afeef.

The office alleges the letter was sent by Afeef’s nephew.

Speaking in an interview to ‘Sun’ this Wednesday, Afeef denied the allegation by Hisaan’s campaign office.

He said the allegation Hisaan abused a group of students wasn’t a new to him.

He said Hisaan needed to clear the air by proving she did not carry out the alleged abuse.

Meanwhile, Hisaan’s campaign office has urged State authorities to investigate the letter which it claims is a false report.

Former Maldivian President and Leader of MDP, Mohamed Nasheed has taken to the Twitter to express his confidence in Hisaan.

“This politically motivated attempt at running the reputation of my attorney and MDP’s candidate for the Thulhaadhoo constituency is both cowardly and shameful. Uz. Hisaan Hussain has by full trust,” wrote Nasheed.