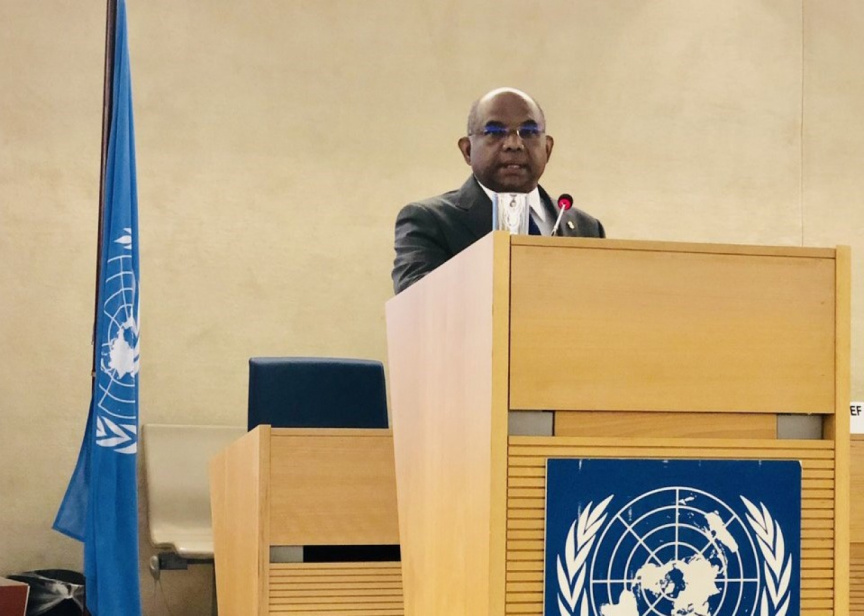 The Maldivian people, during the last presidential elections, said no to authoritarianism and yes to democratic values, and the current Maldivian administration is committed to upholding democratic values and protecting fundamental human rights, says Minister of Foreign Affairs, Abdulla Shahid.

Shahid made the statement during his address at the high level segment of the 14th session of the Human Rights Council of the UN last Monday night.

“The Maldivian people said no to authoritarianism, and yes to democratic values, yes to fundamental human rights and yes to freedom of assembly and expression,” said Shahid.

Shahid, during his address, emphasized on the reform agenda initiated by President Ibrahim Mohamed Solih’s administration which assumed power on November 17, 2018.

He said that President Solih’s envisioned bringing transformative change to the Maldivian society where respect for human rights is a way of life.

Shahid spoke of the presidential commission established by Solih during his first day in office to investigate unsolved murders and disappearances which have taken place in Maldives over the past couple of years.

“During the last five years, a journalist Mr. Yameen Rasheed was brutally murdered, and another Mr. Ahmed Rilwan disappeared. To bring the perpetrators to justice, President Solih has established the Commission on the Investigation of Murders and Disappearances to scrutinize allegations of murder and involuntary disappearances,” said Shahid.

He also spoke about climate change and its adverse impacts of small island nations such as Maldives, which he described as a violation of basic human rights.

He said the Maldivian administration was committed to its ongoing engagement on the issue in the international platform.

During his address, Shahid also expressed concern over the ongoing human rights violations in Myanmar against Rohingya Muslims, and called for recognition of the Palestinian people’s right to self-determination.

Concluding his address, Shahid said the Maldivian administration was strongly committed to sustaining democracy and promoting and protecting human rights in Maldives.

Ministry: Maldivians in Wuhan are in good health

'Maldivians partaking in foreign wars is a great loss'