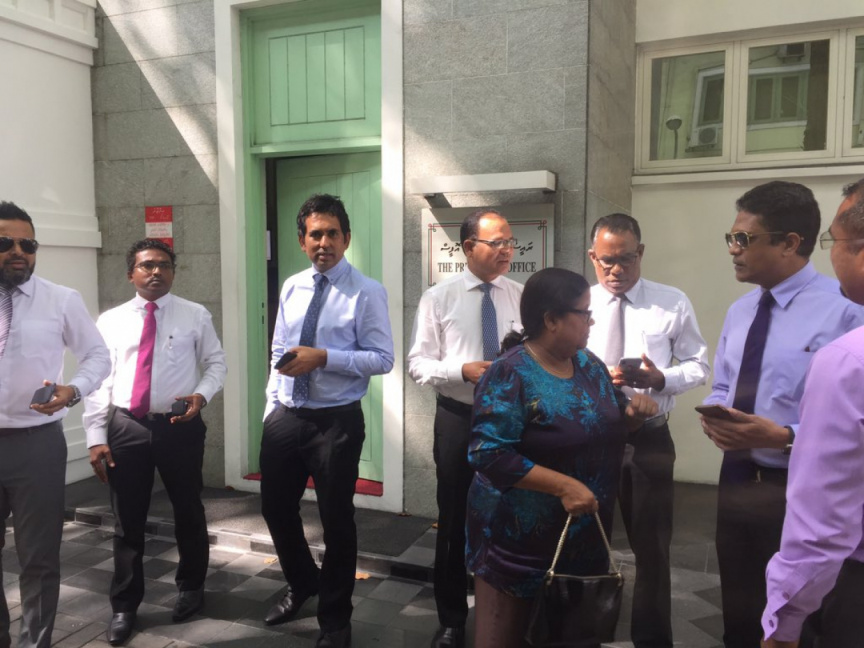 Senior officials from PPM and PNC wait outside the President's Office following their meeting with President Ibrahim Mohamed Solih on February 24, 2019. (Photo/Twitter/Hussain Hassan)

Senior members of the Progressive Party of Maldives (PPM) and People’s National Congress (PNC), this Sunday, paid a call on President Ibrahim Mohamed Solih over the arrest of former Maldivian President and Leader of PPM, Abdulla Yameen Abdul Gayoom.

Yameen was arrested pending the outcome of his trial on February 18 following review of evidence submitted by the State to show he attempted to tamper with the State’s witnesses in the case by offering them bribes.

President’s Spokesperson, Ibrahim Hood confirmed the meeting took place. He said the meeting was held at the request of senior officials from PPM and PNC, but declined to comment any further.

PPM’s parliamentary group leader, MP Ahmed Nihan Hussain Manik reported to ‘Sun’ the meeting was requested to share the concerns of the members of PPM and PNC who believe Yameen is being held unjustly, in violation of proper procedure.

Nihan said Solih promised to “look into the matter”.

He, too, declined to provide any further details on the meeting.