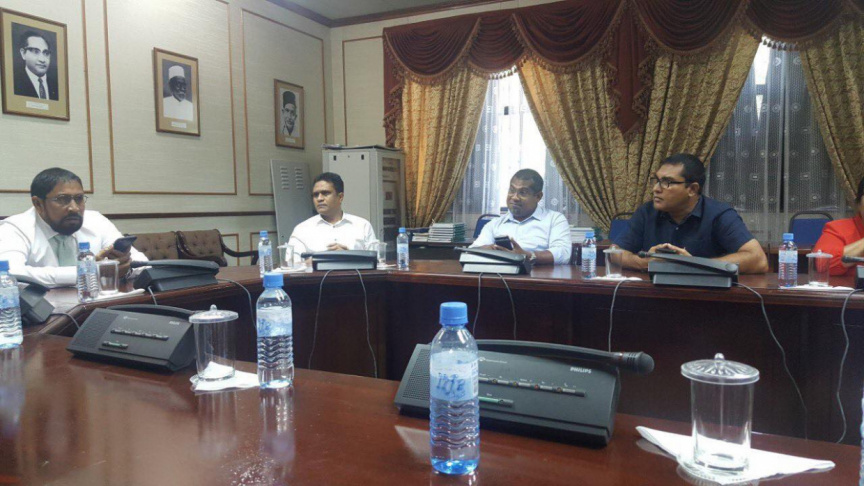 Meeting between members of PNC and PPM and the Speaker of Parliament and Leader of JP, Qasim Ibrahim at the Parliament on January 23, 2019. (Photo/Twitter/Ahmed Nihan Hussain Manik)

Lawmakers behind People’s National Congress (PNC) have held a meeting with the Speaker of Parliament and Leader of Jumhoory Party (JP), Qasim Ibrahim over the delay in registration of PNC – which alleges is deliberate on the part of Elections Commission (EC).

PNC is spearheaded by former Maldivian President and Leader of Progressive Party of Maldives (PPM), Abdulla Yameen Abdul Gayoom along with members of the PPM leadership.

Pictures of the meeting between Qasim and PPM lawmakers, headed by leader of PPM’s parliamentary group MP Ahmed Nihan Hussain Manik and former deputy leader of PPM and the official founder of PNC MP Abdul Raheem Abdulla at the Parliament have been released over Twitter this Wednesday.

Nihan confirms the meeting took place at the Parliament this Wednesday.

He said the meeting was held to discuss holding the EC accountable through the Parliament “for the various deliberate attempts” to delay the registration process.

Nihan said the politicians had the option of demonstrating in front of the EC headquarters, but opted for a peaceful route to ensure the registration process goes smoothly.

“The easiest and shortest route is to summon them in front of the Committee on Independent Institutions. The Parliament is currently in recess. Therefore, this can only be done with the authority of the Speaker of the Parliament,” said Nihan, explaining his reason for the meeting with Qasim.

Nihan said Qasim had pledged his full cooperation and assistance in resolving the issue.

Member and Spokesperson of EC, Ahmed Akram reported earlier that the commission is verifying the new membership forms.

PNC to increase number of deputy leaders to 4

Nihan: This was the first step to fostering closer ties