Nihan: This was the first step to fostering closer ties with Qasim 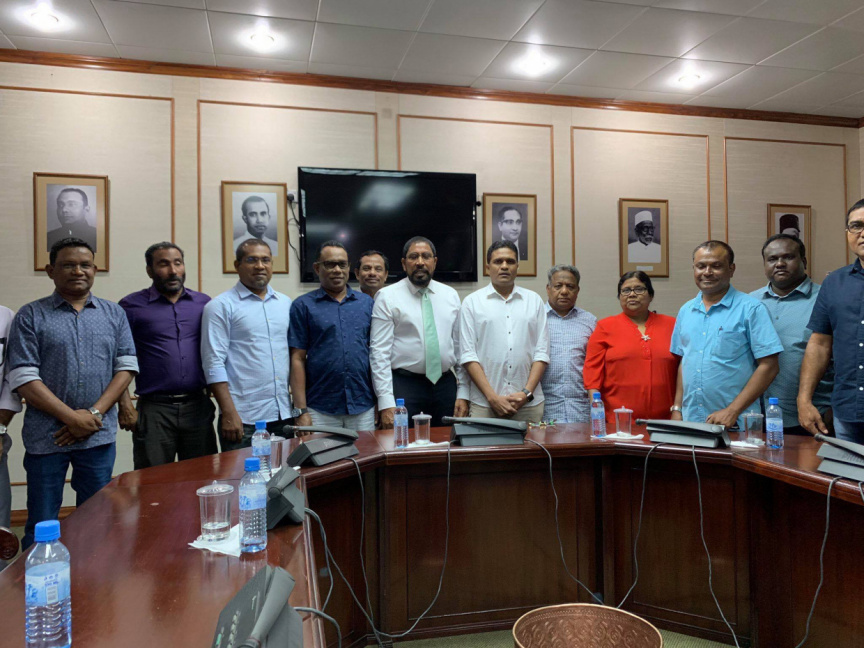 Meeting between members of PNC and PPM and the Speaker of Parliament and Leader of JP, Qasim Ibrahim at the Parliament on January 23, 2019. (Photo/Twitter/Ahmed Nihan Hussain Manik)

Progressive Party of Maldives (PPM) is deeply interested in working closely with the Speaker of Parliament and Leader of Jumhoory Party (JP), Qasim Ibrahim, and this Wednesday’s meeting is the first step to establishing the relationship, says Leader of PPM’s parliamentary group, Ahmed Nihan Hussain Manik.

Speaking to ‘Sun’ regarding the meeting, Nihan said the meeting had been a success, and praised Qasim – one of the government coalition leaders who recently expressed unhappiness with the coalition partners and interest in seeking an alliance outside the coalition.

“All members of the PPM are deeply interested in working closely with him [Qasim]. The door has been opened. This, I believe, is the first step in our efforts,” said Nihan.

He said that though Qasim met with the PPM lawmakers in his capacity as Speaker of Parliament this Wednesday, PPM and JP planned on holding future meetings on behalf of their respective parties.

The relationship between JP and the main government party, Maldivian Democratic Party (MDP) soured following MDP’s decision to contest for all 87 parliamentary seats in the upcoming elections, which Qasim has accused of being a violation of the original coalition agreement.

The announcement of the decision on December 1, 2018 followed weeks of heated exchanges of words between Qasim and former Maldivian President and Leader of MDP, Mohamed Nasheed.

Qasim, in a tweet on January 18, accused MDP of kicking JP to the curb as soon as it gained power.

“MDP has once again kicked JP to the curb once they gained power. JP has to play beggar again. JP is ready to negotiate with any party which wishes to work together with JP to contest for parliamentary seats. In Sha Allah,” wrote Qasim in his tweet, announcing JP was ready for alliances outside the coalition.

EC: Verifying authenticity of forms is not a crime