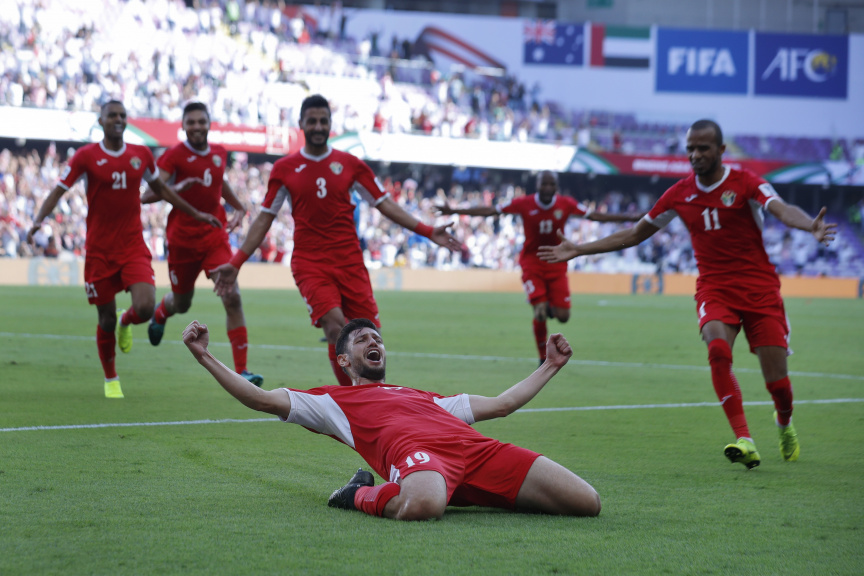 AL AIN, United Arab Emirates (AP) — If Australia is going to retain the Asian Cup, the champions will have to do it the hard way.

In the first big shock of the 2019 tournament, Jordan — the world's 109th-ranked team — pulled off one of the biggest wins in its history by beating Australia 1-0 on Sunday.

Anas Bani Yaseen was the match-winner, finding space following a short-corner routine by Jordan to guide in a near-post header in the 26th minute.

Jordan had just 24 percent possession in the match and rode its luck under severe pressure in the second half, with Awer Mabil hitting the post for Australia and Jamie Maclaren having a goal disallowed for a narrow offside.

After Jordan goalkeeper Amer Shafi produced a double save in the last attack of the match, the referee blew the final whistle and Jordan's players sank to their knees and clutched their heads.

While the Jordanians are already close to a third quarterfinal appearance in the Asian Cup, Australia likely cannot afford another setback against Syria or Palestine in its other Group B matches in the United Arab Emirates.

"This will hurt everyone, I know that," Australia captain Mark Milligan said. "It's hurting me at the minute."

In the second game on Sunday, Sunil Chhetri overtook Lionel Messi to become the second highest-scoring active international player by netting two goals for India in its 4-1 win over Thailand.

Chhetri moved onto 66 goals, one more than Messi. Only Cristiano Ronaldo (85) is ahead of him.

Anirudh Thapa and Jeje Lalpekhlua also scored for India, which climbed atop Group A above host nation United Arab Emirates and Bahrain, who drew 1-1 on Saturday.

Australia, the second-best team in the Asian conference behind Iran, has been in a similar position before at the Asian Cup — in 2007, the Socceroos drew their opener to Oman and then lost 3-1 to Iraq, only to qualify for the knockout stage by thrashing Thailand 4-0 in their last group game.

Twelve years on, they appear to be missing influential midfielder Aaron Mooy, who plays in the English Premier League with Huddersfield and is out of the Asian Cup because of injury. They also lack a cutting edge, with veteran striker Tim Cahill now retired and Mathew Leckie not currently available after a hamstring injury.

The Australians couldn't break down a packed Jordan defensive line, resorting in the end to long balls into the penalty area.

"I just think we were a little lethargic in our ball movement," Milligan said.

"We know we have to be better if we want to progress and succeed in this tournament."

The 2019 edition of the Asian Cup is the biggest ever, with 24 teams involved — mirroring the expansion made by the European Championship for its most recent tournament in 2016. It is taking place against the backdrop of a diplomatic crisis in the gulf region.