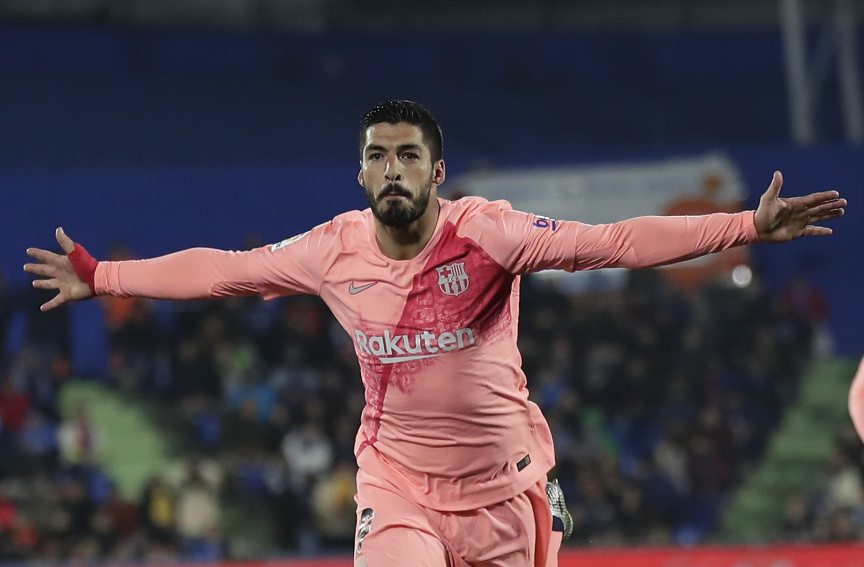 BARCELONA, Spain (AP) — Barcelona took another step toward successfully defending its Spanish league title after winning at one of the toughest teams to beat in the competition on Sunday, while its rivals dropped points.

Lionel Messi and Luis Suarez scored as Barcelona beat Getafe 2-1. That allowed it to open up a five-point advantage over second-placed Atletico Madrid, which had to fight back for a 1-1 draw at third-placed Sevilla.

Real Madrid was the biggest loser of the round, defeated 2-0 at home to Real Sociedad in a match it finished with 10 men and 10 points behind Barcelona in fifth place.

With one round left before the halfway stage, Barcelona coach Ernesto Valverde isn't ruling Madrid out.

"They are still in it," Valverde said. "Mathematically they are still not out of it and we have to be prudent. We know the competitive DNA that Madrid has. And besides, there are other rivals like Sevilla and Atletico that are always tough."

Leading the league in goals scored, Messi and Suarez have Barcelona looking like a champion-in-waiting.

Messi quashed a promising start by Getafe when he scored the 20th-minute opener. He raced forward to control a loose ball in the area, poked it between the legs of goalkeeper David Soria and slotted it home from a tight angle.

Suarez matched his teammate's effort in the 39th when he planted his left foot as a pivot and used his right leg to rifle the ball from the edge of the area into the corner of the net with a waist-high volley.

Messi leads the league with 16 goals, followed by Suarez in second place with 12.

Jaime Mata pulled one back for Getafe just before halftime, but Mata missed a golden chance to level in the second half when he missed an open net.

First, Casemiro, recently back from a injury layoff, committed an ill-advised foul inside his own area during Sociedad's first attack, gifting Willian Jose a third-minute penalty.

Then it was Lucas Vazquez, the team's busy winger, who earned two bookings for nasty tackles. That left his side down a man for the last half hour.

And even though Madrid continued to threaten, Sociedad eventually took advantage of the extra man to finish the hosts off with a late goal from substitute Ruben Pardo.

Madrid's defeat came just days after it was held to a 2-2 draw at Villarreal.

"We committed an (early) error ... so we can't blame anyone but ourselves," coach Santiago Solari said.

Sociedad got the win in its first match since coach Imanol Alguacil replaced the fired Asier Garitano.

It was Griezmann versus Sevilla at the Sanchez Pizjuan Stadium.

Wissam Ben Yedder put Sevilla ahead in the 37th minute of a first half that the hosts dominated — until Griezmann stepped up for Atletico.

After Thomas Partey earned a foul outside the area, Griezmann curved a free kick over the defensive barrier and into the corner of the net to level in the 45th.

It was the France forward's club-high eighth goal in the league, and his 12th in all competitions.

The stalemate allowed both rivals to extend their unbeaten streaks, with Atletico undefeated in 15 rounds and Sevilla in nine.