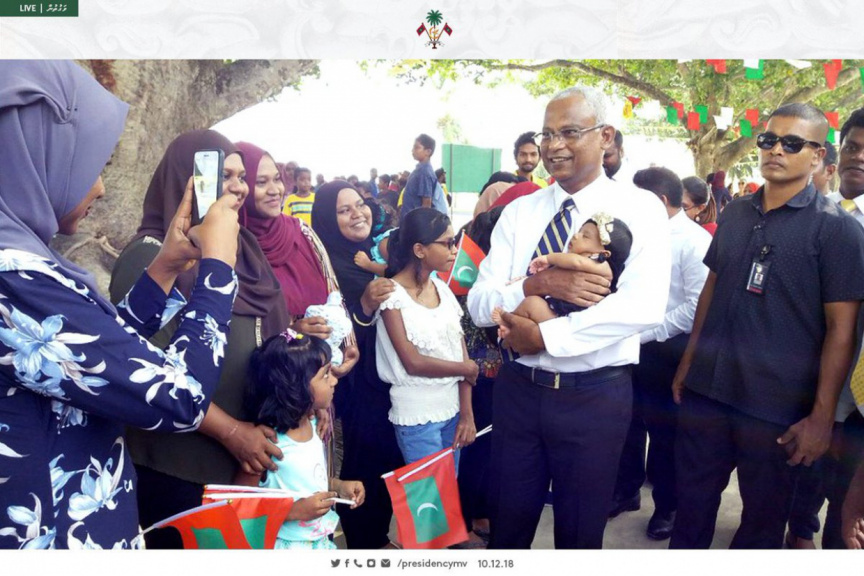 President Ibrahim Mohamed Solih at A. A. Ukulhas on December 10, 2018. (Photo/President's Office)

Speaking during his visit to A. A. Ukulhas this Monday morning, Solih said a strong decentralization system of governance in Maldives was crucial for the development of the country.

The Cabinet made the decision to reinstate powers and responsibilities which were transferred to ministries by the previous administration back under the jurisdiction of city councils on December 4.

Solih said that the current administration does not advocate for all responsibilities and powers to be centralized to the executive government, and said that work on amending the Decentralization Act was “in progress”.

He said the administration had already begun to deliver on its pledge to empower local councils, by reinstating original powers and responsibilities, and appealed to local councils to work closely with locals in delivering its services.

During his speech, Solih noted the housing shortage faced by the people of Ukulhas and said land hasn’t been issued at the island for 21 years.

He announced a land reclamation project will be run on the island in 2019 to provide a solution to the issue.

He said the money for the project has been allocated in the annual State budget.

Solih also praised Ukulhas for its initiatives in sustainable development, including the USD 4 taken from tourist beds at the island which is used to fund cleanup programs.

“In Ukulhas, you see the community taking its own initiative and working towards sustainable development. This island has 370 beds for local tourism. And local tourism is the basis of the community’s initiatives to protect the environment,” said Solih.