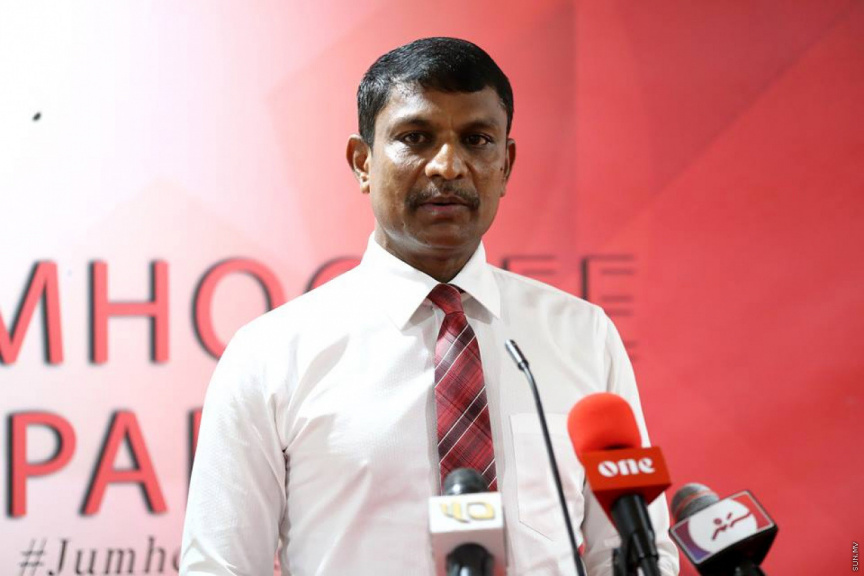 MP for Vilufushi constituency, Riyaz Rasheed, speaking to the press after signing to Jumhoory Party on 29 November 2018 at Maafannu Kunooz. (Sun Photo/Fayaz Moosa)

MP for Vilufushi constituency, Riyaz Rasheed, has said that he didn’t sign to the government coalition’s Jumhoory Party (JP) to gain any personal goals.

Elected to the parliament on the PPM ticket, MP Riyaz signed to JP last yesterday at JP Office at Maafannu Kunooz. Speaking at the ceremony, Riyaz said that he didn’t sign to JP with a personal goal but to uphold the Maldivian democracy on behalf of his constituents.

Serving his third term in the parliament, MP Riyaz said that it was a decision made for the future of his constituents in regards to future projects, employment and youth.

He said that it was not a surprise decision and even the President of PPM, Abdulla Yameen Abdul Gayoom, would agree to that. MP Riyaz said that he met with the heads of PPM and informed them that he was leaving the party.

And so he has been at the side of the JP Leader, Qasim Ibrahim, when he’s in need including the 2013 Presidential Election. Riyaz said that he would continue to serve with Qasim in the future as he did so in the past.