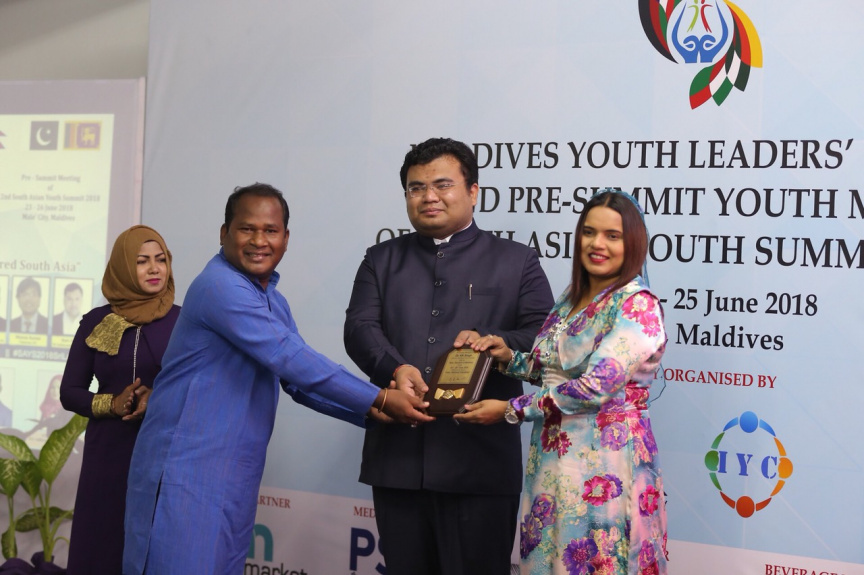 (From L-R) President of IYC, Jayanta Patra, Chairman of IYC, Dr. K. K. Singh and Minister of Youth and Sports of Maldives, Iruthisham Adam at the SAYS 2018 pre-summit meeting at the Social Center in Male' City, Maldives, on June 23, 2018. (Sun Photo/Fayaz Moosa)

Regional Alliance for Fostering Youth (RAFY) NGO has held a pre-summit meeting in Maldives ahead of the South Asian Youth Summit (SAYS) 2018.

The SAYS pre-summit meeting in Maldives was held by RAFY NGO last Saturday at the Social Center, in association with the International Youth Committee (IYC).

Sponsors and partners of the SAYS 2018 were also awarded certificates of recognition at the ceremony.

During the pre-summit meeting, youth leaders discussed opportunities available to the youth and the challenges they face in Maldives.

The pre-summit meeting was attended by Chairman of IYC, Dr. K. K. Singh and President of IYC, Jayanta Patra and well as other members of IYC.

RAFY NGO reports 40 young Maldivian men and women will be attending the SAYS 2018 under their charge.

SAYS 2018 will be the second SAYS. Maldives won a number of awards at SAYS 2017, which was held at Bhubaneshwar, India, including the ‘Best Country’ award.

IYC reports the SAYS 2018 is a call for action to contribute to the establishment of a permanent youth engagement mechanism that ensures consistent follow- up with young people and further boosts their participation and partnership in the implementation of the SDGs at national, regional and global levels.