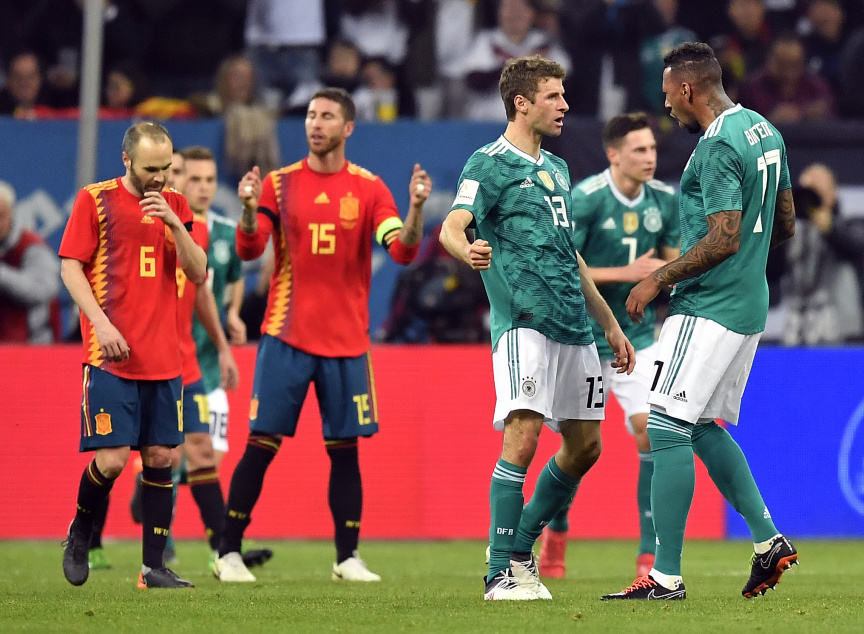 Valencia forward Rodrigo Moreno got Spain off to a perfect start thanks to a perfectly weighted pass from Andres Iniesta, but Thomas Mueller set another highlight in a game of many when he equalized from distance ten minutes before the break.

Both former World Cup champions extended their world-leading unbeaten records, 2014 winner Germany stretching its run to 22 games, while the 2010 champion is now 17 games without defeat.

"It was a game that could have ended 2-2 or 3-3," Mueller said. "Altogether you could see what both sides can do. It was a good test but it's clear there's room for improvement."

Regular captain Manuel Neuer is still recovering from the foot injury that has kept him out since September. Barcelona goalkeeper Marc-Andre ter Stegen played in his place.

Spain's Julen Lopetegui surprised many by starting Moreno in place of the more experienced Diego Costa. But Moreno has 13 league goals this season, with four in his last three appearances.

The Valencia forward needed only six minutes to open the scoring off Iniesta's brilliant pass behind the German defense.

The impressive Isco beat Jonas Hector to the ball and sent in a low cross for David Silva before Timo Werner went close in response for Germany.

Most of the highlights were coming from Spanish players before Mueller provided one of his own with the equalizer. Receiving the ball in a central position well outside the penalty area, Mueller looked up and let fly from a standing position inside the top left corner.

Mueller then played Julian Draxler in, but Spain captain Sergio Ramos closed the door on the Paris Saint-Germain midfielder. Ramos was making his 150th appearance.

David de Gea produced a brilliant save to deny Draxler after the break, ten minutes before Ter Stegen blocked Isco from point-blank and De Gea stretched to save from Ilkay Gundogan at the other end.

"I think it's a fair result. Both sides had chances. It was a relatively open game at a high level. A good test for us," Kroos said.

Germany next plays Brazil in Berlin on Tuesday, when Spain hosts Argentina in Madrid.