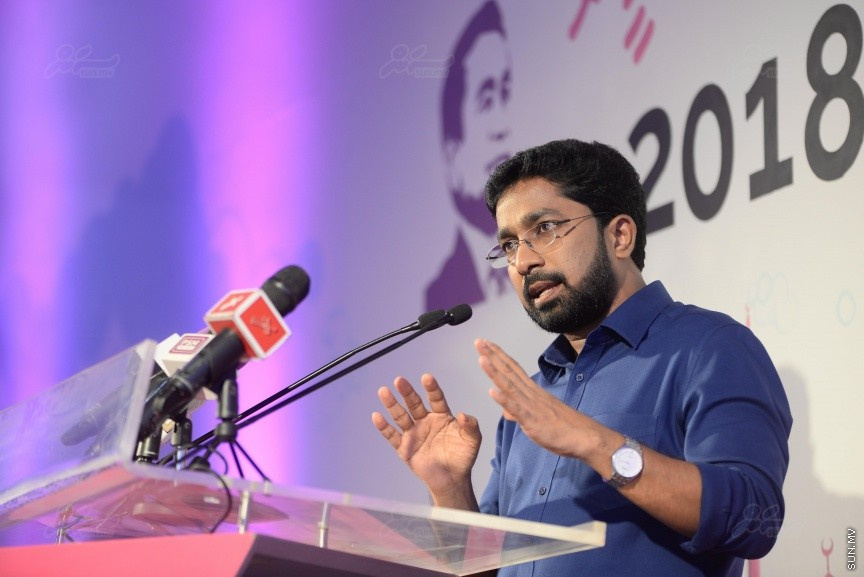 Speaking on PSM’s Nation First show last Sunday night, Azleen said ex-CP Arif was dismissed for failing to answer his phone calls, despite the fact that Areef was duty bound to report to him. Azleen said Areef failed to answer phone calls by President Abdulla Yameen Abdul Gayoom himself.

Areef was arrested by authorities on March 6 for complicity in an attempt to overthrow President Yameen’s administration.

Home Minister Azleen said Areef was arrested for investigation due to some “suspicious evidence”.

He said that Saudhy, who was appointed Acting CP after Areef’s dismissal, was removed from the post due to “difficulties in getting things done”.

“Saudhy himself knew his appointment was temporary. The President made his decision after serious consideration as he believed keeping someone who is only temporary is such a serious post in such a serious situation was not the best option,” said Azleen, adding that Saudhy would have also been arrested if his intentions had been different.

At the Sunday night’s show, Azleen said the Maldives Police Service was a law enforcement agency and would not take any illegal action.

He said the whole service was not liable for dismissals of individual officers for a crime they may commit.

“There is no reason why an entire system should have to take the blame for the actions of one or two individuals within the system,” said Azleen.

The Home Minister said the term “political prisoners” was not referred to anywhere in the Maldivian Constitution or any Maldivian law.

He also addressed claims the police are using unnecessary force in dealing with protestors.

The Minister said police officers will not stand by when a law is being violated.

“The police will perform their legal duty. They claim the police are using pepper spray without any prior warning. Before the issue of warning, the Maldivian Constitution clearly states there cannot be any gathering of any sort in the streets of Male’ City without official approval of police,” said Azleen.

The Home Minister also expressed objection to criticism by foreign countries and organizations over the political situation in Maldives.

He said no country had the right to interfere in internal affairs of another country.

The Minister described the world as a “global village”, and Maldives as one of its “villages”. He said that there were countries which supported the decisions made by the Maldivian government and countries which didn’t. He said he did not want to blame any particular country for its stand.