Coalition was held together not because of President Waheed 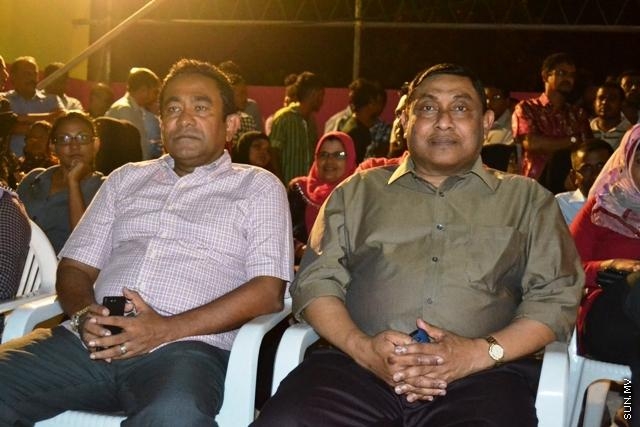 Abdulla Yameen has said that the reason that current President Dr Mohamed Waheed Hassan Manik’s coalition government was able to survive until today was not because of his smartness. The president took office in February 2012.

Speaking at a the opening of a temporary campaign station for youth at H. Sun last night Yameen said that President Waheed is his close friend and that PPM duly praises him, but that does not mean that the coalition is being held together due to the president’s talent to bring political parties together.

“President Waheed is very close to me. He is also very dear towards our party. So we accord him due gratitude. But I have to say that we are the party who defends this government. We are trying not to let MDP come to power, and the work we do towards that end is what is keeping this coalition together. It is not because the president’s smartness or his talent to keep the parties together,” said Yameen.

Special Advisor to the President Dr Hassan Saeed has said that the president is the only leader who has successfully worked with all the parties, and that this entitles him the presidential race this year.

Yameen’s rival Umar has rebutted Yameen’s pledge that he will try and find oil in the Maldives if PPM comes to power saying that no island country that has a large tourism industry will try to exploit oil, and that oil might leak into the sea in attempt to attain it and that it might cause the country’s tourism to crumble.

Yameen too rebutted Umar’s comeback last night. He said that Umar’s biggest fear is that the oil might not be properly tapped and might leak into the sea and that it has been 50 years since oil has been obtained by such methods in the North Sea and that no accidents have happened so far. He also said that it is now clear that Umar believes that there is oil in the Maldives.