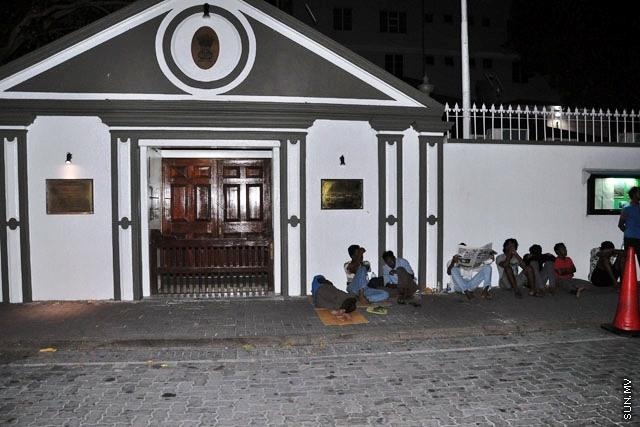 The people standing in the queue told Sun Online last night that the queues started forming at 11pm last night.

One person who had obtained a queue number for applying for the visa told Sun Online that he had been trying to get the visa for a long time now, and that the first time his number came up, the High Commission did not accept his application because his documents were incomplete.

“I had to stand in the queue like this to get a number the first time as well. When I reached the counter, they didn’t accept the forms because some documents were missing. Now I have gathered all documents and am standing here to get a queue number again. I joined the queue just before 12 o’clock,” he said.

A person from Addu City said that he had been trying to get medical visa for over a week, but it had not been possible because he had not been able to get a queue number to submit the application. He said that a family member was suffering from a kidney problem.

“When a member of my family went to see the doctor about a kidney problem, the doctor advised to go to India as soon as possible. Since then I’ve been trying to get medical visa to go to India; now it’s been over a week. It has still not been possible to get the visa. Since it’s a kidney problem, we can’t go as tourists. We may have to be there for a long time. We don’t dare go without the proper visa,” he said.

Another person who was standing there said that he came to Male’ with the papers from the atoll hospital, and that he was only informed that papers from atoll hospitals are not accepted when applying for medical visa after he stood on the queue to obtain a number and reached the counter.

“I was very surprised to find out that they accept documents of clinics in Male’, but not atoll hospitals. This requires us to pay huge sums of money to rent rooms in Male’ and stay here for long periods. Moreover, we have bought tickets on Spice Jet since they offer low prices to Cochin, but if we don’t get the visa, we’d have to change the ticket. There’s a relatively large fine if we change the date of travel on Spice Jet tickets,” he said.

The Indian High Commission has said that presently, 70 or 80 visas are issued daily; and that the visa problem will not be solved unless they revert to the previous system of allowing Maldivians to travel to India for 90 days without visa.

The High Commission said that Indian nationals are often fined amounts such as MVR15,000 or MVR50,000 due to failure by their employers to pay their visa fees, and are sent to prison following failure to pay these fines. They said that laborers from India who come to Maldives face several such problems, and that the Maldivian government, despite saying that these issues will be addressed, has not taken any action to solve them.

Disbursement of funds to political parties will commence this week: Elections Commission