Maldivian youth arrested in India says he was tortured in Jail 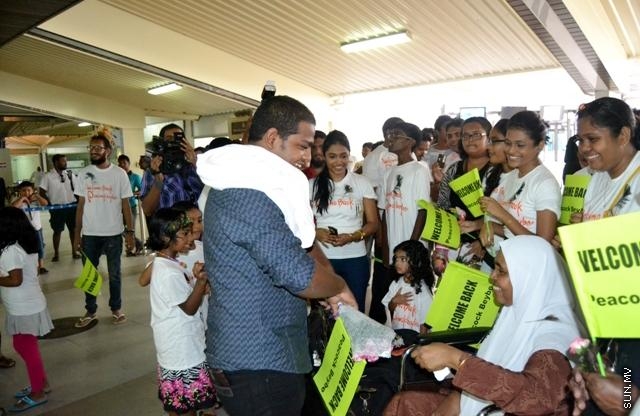 Ahmed Ruffan Ali, 23, who was arrested at Trivandrum Airport during December last year for having a bag of peacock feathers which he was intending to take home, says that he was tortured by officers at the Indian jail where he spent 13 days.

Speaking to reporters upon his arrival in Malé today, Ruffan says that officers of the jail wanted him to subject himself to their instructions, and that he was tortured due to his refusal.

Ruffan has been bailed out of jail. His family did what had to be done, and the Maldivian Consulate, Ruffan says, did not do a thing. “I paid first 25,000 Rupees, and then 10,000 Rupees as fine, and all the help I got came from my family. The Consulate there did not concern itself with me”, said Ruffan.

Ruffan said that he bought the feathers at Trivandrum’s Chala Bazaar, and that he had done it before also, and that he was not aware of the ban on buying and selling peacock feathers.

Ruffan was arrested at the Airport, while he was carrying the feathers in a handbag, after the check-in processes were complete, and just before boarding.

Family and friends of Ruffan welcomed him today at the Ibrahim Nasir International Airport. Among the banners they were sporting, some read “Peacock Brother”, apparently a new pet name for the youth.

Ahmed Ruffan later explained his words, saying that when he said he was "tortured", he meant that he was beaten by the officers at the Indian jail.

Ruffan used the word "aniyaa" several times without any explanation of what he meant, while speaking to reporters upon his arrival from India, at the INIA, saying he had to bear "aniyaa" at the hands of officers at the prison. The word "aniyaa" in Divehi language can be translated into English with a number of different terms to express a number of varying shades of meaning, such as "injury" or "harm". However, when the term is used in the context of police, jail, incarceration, and prisoners, the word "aniyaa" is used to mean "torture".

Ruffan has stated that when he used the word 'aniyaa' to describe what the officers did to him, he meant that he was beaten up (for which there is a precise and specific Divehi term, 'thelhun') while in jail, and that he was not tortured.