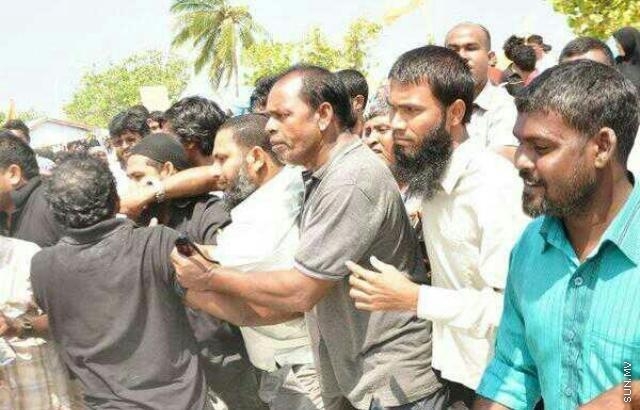 A Councilor of B. Thulhaadhoo Island Council, belonging to former President Mahomet Nasheed’s Maldivian Democratic Party (MDP) and a crowd of thugs have perpetrated violence against Shaikh Imran Abdullah, President of the Islamist Adhaalath Party, and his company, upon their arrival in the island in Baa atoll.

According to a source from Adhaalath Party, the crowd of violent thugs who tried to prevent Shaikh Imran’s visit to the island, and tried to attack him and his colleagues were members of MDP, led by the party Councilor.

A man from Thulhaadhoo spoke to Sun Online, saying that the attackers threw stones at the visitors, and shouted obscene words at them. He also said that several of the visitors were injured during the incident.

The police have, meanwhile, arrested a number of people following the incident, and according to reports, the MDP Councilor is also among the detained.

Adhaalath Party also said that MDP members tried to disrupt a membership program conducted by the part yesterday in Malé, at Giyaasuddin School as well.

Maldivian youth arrested in India says he was tortured in Jail