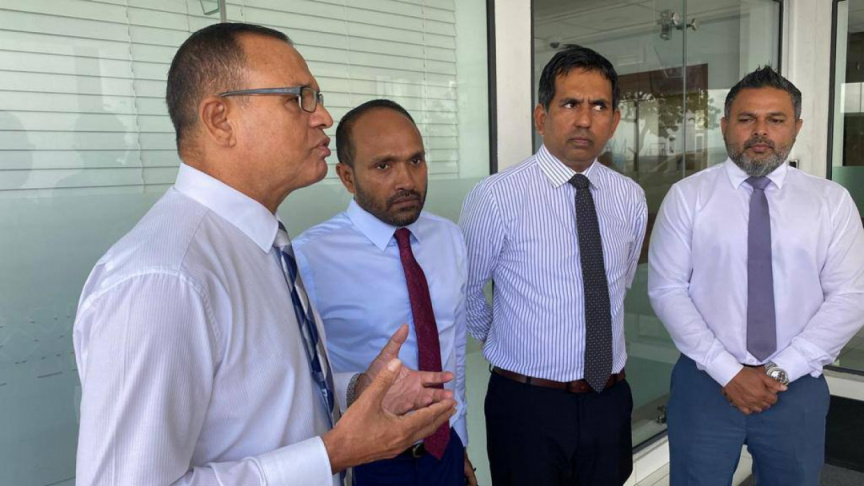 Opposition leaders talk to the press after a meeting with British High Commissioner Caron Röhsler on January 25, 2023. (Photo/PPM)

Leaders from the opposition coalition, composed of Progressive Party of Maldives (PPM) and People’s National Congress (PNC), met with the British High Commissioner Caron Röhsler on Wednesday, to voice concern over the imprisonment of PPM’s leader, former president Abdulla Yameen Abdul Gayoom, who was sentenced to 11 years in prison for money laundering and bribery in December.

PPM’s spokesperson Heena Waleed told Sun that the opposition shared their concern over the upcoming presidential election, and told Röhsler that they don’t believe in the fairness of an election held after imprisoning the opposition leader.

They also shared concerns of the use of state resources in the campaign for Maldivian Democratic Party (MDP)’s presidential primary.

Heena said that the opposition will continue to meet foreign diplomats in their efforts to free Yameen.

“Our team went to Lanka. And we will reach additional parties,” she said.

The opposition coalition describes the conviction against Yameen as a “haram conviction”, and continue to support Yameen as their presidential candidate for the upcoming election, though the conviction disqualifies him from the election.

Yameen’s lawyers are preparing to appeal the conviction with the High Court.