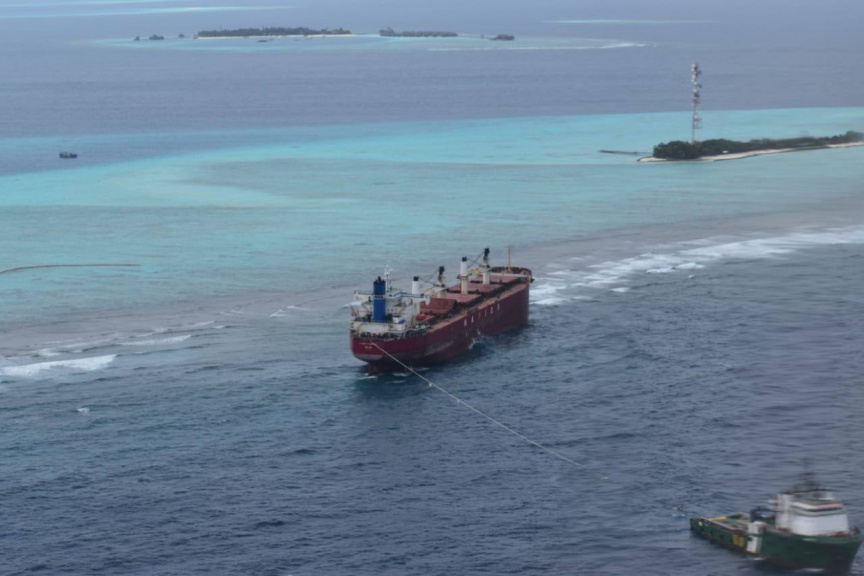 Environmental Protection Agency (EPA) has announced a large-scale project that would spread over five years to restore Rasfari reef which was substantially damaged when a cargo ship ran aground on the reef in 2021.

The Panama-flagged cargo ship measuring 190 meters in length, MV Navios Amaryllis, ran aground on the reef west of K. Rasfari in the early hours of August 19, 2021.

The owner of the ship settled a hefty fine of USD 10 million (MVR 154.2 million) in December 2021 – inclusive of damages to the reef as well as the cost of restoring the reef to its previous state. The payment was wired to Maldives Monetary Authority’s (MMA) public bank account, and marked the first time the government recovered such a large sum of money for causing environmental damage.

EPA, made an announcement yesterday, seeking parties interested in partnering up with the agency for the ‘Rasfari Restoration Project’ aimed at coral reef restoration at Rasfari reef.

The areas assistance is sought:

Commenting on the project, Fathuhulla Ismail, the project manager, told Sun that anyone interested can submit their Expression of Interest (EOI).

He underscored that the project comprised of exhaustive tasks.

“I believe this to be an opportunity for everyone working in this sector; scientists, divers, photographers and start-ups even,” he said.

Fathuhulla said that the project would be officially inaugurated very soon.

Rasfari is an island on which telecommunication work is carried out. The island and the reef surrounding the island have been declared protected since September 27, 1995. The area is famous amongst divers and one of the most environmentally diverse areas in Kaafu Atoll; with sightings of endangered species in the Maldives such as rays, sharks and turtles.

Naeem: EPA did not state that Afcons has been fined