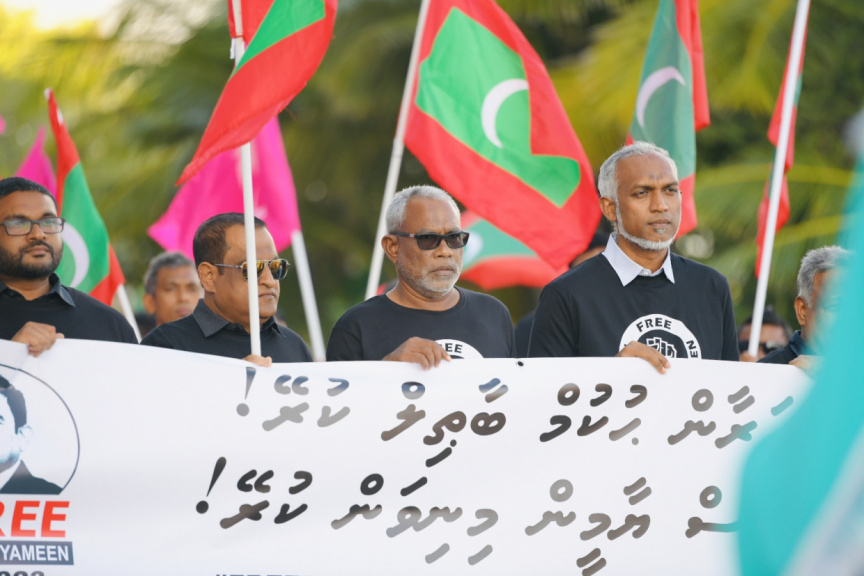 The opposition coalition, composed of Progressive Party of Maldives (PPM) and People’s National Congress (PNC), staged a rally in Male’ City on Friday calling for the release of the opposition leader, former Maldivian president Abdulla Yameen Abdul Gayoom, who was imprisoned for money laundering and bribery earlier this week.

The rally, titled ‘Sababuveri Hingaalun’ began from in front of the PPM headquarters in Henveiru district, and are being attended by PPM and PNC’s senators, general members, and Yameen’s supporters.

PNC’s leader Abdul Raheem Abdulla (Adhurey) told Sun that the opposition wishes to have their call for Yameen’s freedom heard by the government.

According to Adhurey, the rally isn’t being held in Male’ alone, but also in other residential islands across Maldives.

“At this moment, the entire Maldives is marching against the conviction against President Yameen. We aren’t willing to stop our efforts. We are ready to do everything necessary to have this conviction overturned,” he said.

Adhurey described Yameen as “a defender of Maldives’ freedom”. He linked Yameen’s conviction to his campaign against India’s influence in Maldives.

Yameen was sentenced to 11 years in prison on Sunday, after he was found guilty of money laundering and bribery in connection to the sale of V. Aarah for resort development during his administration.

The sentence against him had come a year after he was acquitted after getting convicted of similar charges in 2019.