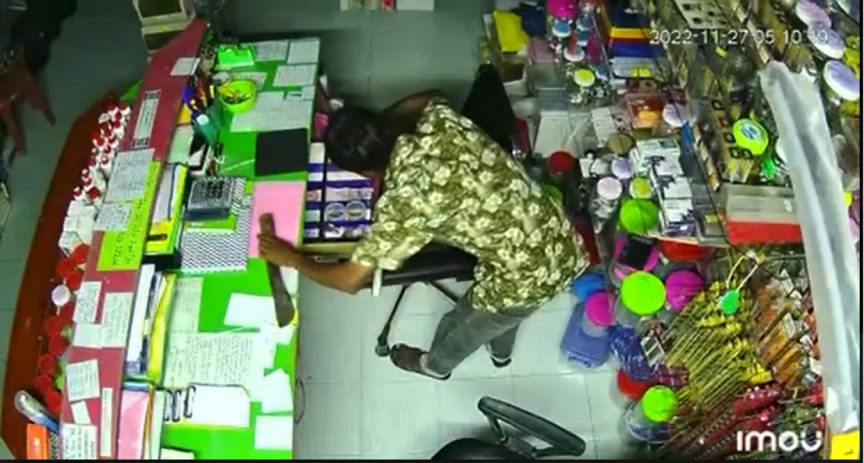 Screen grab from CCTV video footage of a man stealing money from a store in Kulhudhuffushi City on November 27, 2022.

The thief armed with a machete who broke into a hardware store in Kulhudhuffushi City and stole over MVR 4,000 from the cash register has been remanded in custody for 15 days on Tuesday.

Mohamed Moosa, the owner of Farireethi Hardware, told Sun the incident took place around 05:15am on Sunday morning.

A 25-year-old Maldivian man was arrested in connection to the case under a court order on the same day.

A Police Spokesperson told Sun on Tuesday that Kulhudhuffushi Magistrate Court had remanded the suspect in custody for 15 days yesterday.

The thief broke into the store by breaking the lock using the machete.

He was caught on CCTV.

Video footage shows the thief, a man wearing a short-sleeved floral shirt and jeans, steal all the money in the cash register.

Moosa said the thief was known to him.

He said that though the man hadn’t stolen anything until Sunday, he had forced his way into the store and intimidated them on multiple occasions in the past.

Moosa said the theft had been well-planned, and the timing had been set to when everyone would be busy performing the fajr prayer.

Sun has learned that the suspect has a record of arrests in prior thefts, but had been released each time due to lack of evidence – over which some residents from the island have expressed concern.

Draw taken among correct guessers of matches on 27th