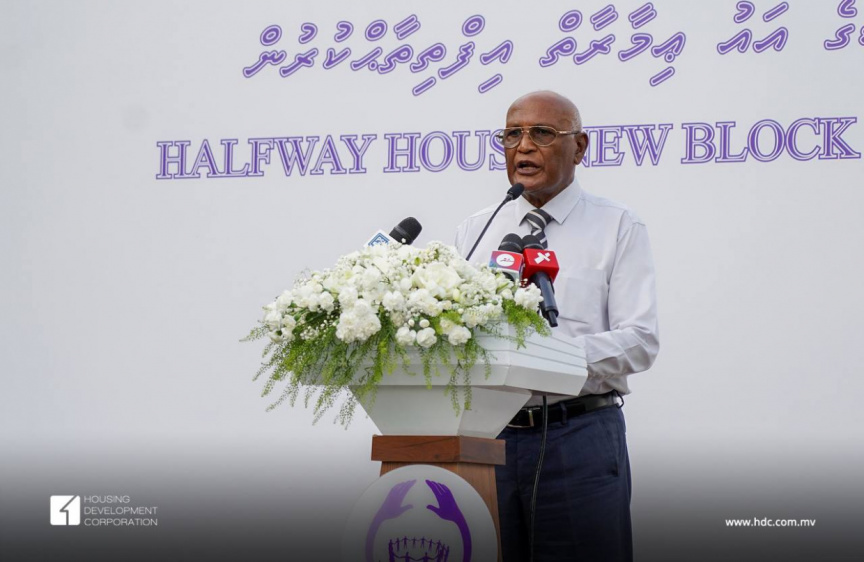 Health Minister Ahmed Naseem speaks at the inauguration ceremony of the new block of Halfway House in Hulhumale' on November 13, 2022. (Photo/HDC)

Health Minister Ahmed Naseem has stated that aspects that need improvement in drug rehabilitation centres have been identified through the survey conducted by the Health Ministry.

Speaking at the inauguration ceremony of the new block of the Halfway House developed at Hulhumale’ by National Drug Agency (NDA) for recovering drug addicts – Minister Naseem said that rehabilitation facilities for drug addicts will be established on all islands very soon. He described efforts to counter narcotics classified as national work.

Minister Naseem emphasized that addiction can only be overcome when the addict makes the decision to overcome it. On this note, he underscored the importance of advice on straying people away from addiction. He added that parents should be trained for this.

“If a child is taking interest in this at an early age, parents should be able to identify this,” he had said.

In this regard, he noted plans to conduct special programs for parents in this trajectory.

NDA’s CEO Imad Solih who spoke at the ceremony said that NDA alone cannot solve a national issue. He emphasized that many ministries and authorities are involved in the work.

“Results can only be produced by thinking about this work on a national scale,” he added.

Underscoring the support received for NDA from ministries and other government authorities in providing rehabilitation services to drug addicts – expressing gratitude to them.

NDA board’s Chairman Shamaau Shareef said that the agency will be inaugurating the Halfway House with renewed hope.

He described youths being addicted to drugs as the biggest social problem currently in existence in the Maldives.

Speaking further, Shamaau said that Halfway House will be inaugurated after recruiting the required number of employees for its operations. He noted that the programs which will be carried out at Halfway House have been formulated ahead of time

“By the will of God, we will able to select people for rehabilitation here starting tomorrow as a result of today’s inauguration. We will monitor persons being discharged after completing rehabilitation through a good, and capable team,” he had said.