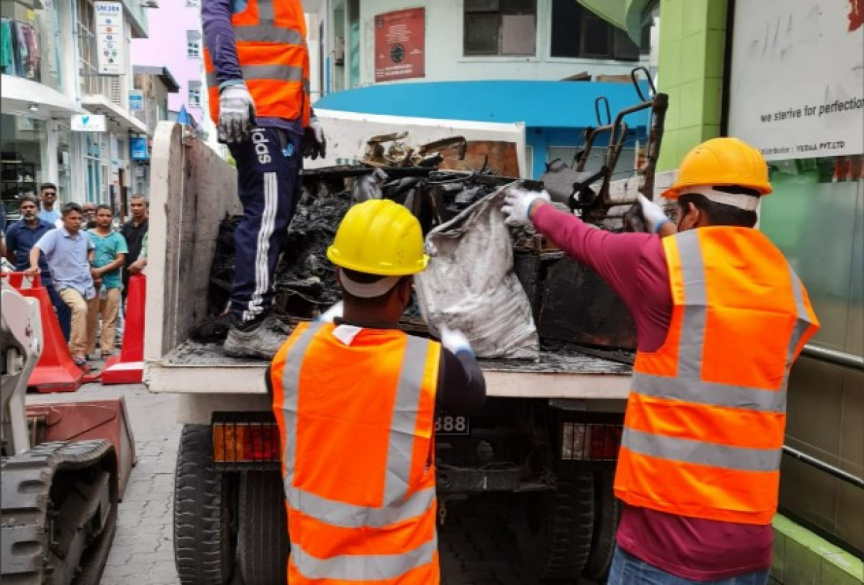 Ministry of National Planning, Housing and Infrastructure has commenced efforts to clean the west side of M. Senrose which was impacted by the fire which broke out at M. Nirufehi on early Thursday morning.

The Ministry said that efforts to clean, and demolish the building was being undertaken by the Ministry’s Public Works Services.

Apart from this, the Ministry is also undertaking efforts to remove some of the vehicles and equipment housed in the garage in the ground floor of M. Nirufehi.

The fire broke out in a car repair garage in M. Nirufehi, located near the Maaveyo Mosque, around 12:30am on early Thursday morning. The garage is located on the ground floor, while the first-floor houses cramped living quarters for migrant workers – the only ventilation – a single window. Authorities state that cooking gas cylinders were next to each bed, where the migrants slept.

As per the owner, the garage housed empty gas cylinders and oxygen cylinders. Two pickups had also been inside.

Reliable sources have confirmed to Sun that the garage was in operation without the required permits.

The identity of one of the deceased men has not been established yet.

The incident marks the fire with the highest number of fatalities in the Maldives.

Male’-Gulhifalhu to be linked via bridge next year

Garage fire: Bodies of some to be sent to home nations