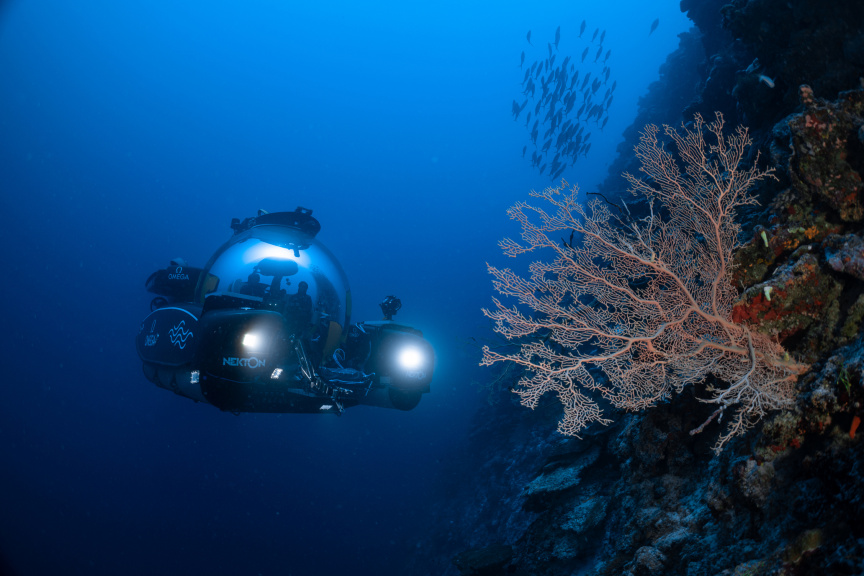 Scientists on the Nekton Maldives Mission have discovered evidence of ‘The Trapping Zone’ - an oasis of oceanic life observed at 500 meters - which they believe is likely a previously undescribed ecosystem.

The discovery has been hailed as hugely significant by the Maldivian government.

“The discovery of ‘The Trapping Zone’ and the oasis of life in the depths surrounding the Maldives provides us with critical new knowledge that further supports our conservation commitments and sustainable ocean management, and almost certainly support fisheries and tourism,” he said.

“Image data, combined with the biological samples we have collected from our submersibles and extensive sonar mapping all point to megafauna predators such as sharks and other large fish feeding on swarms of micro-nekton - small swimming creatures that are trapped against the subsea landscape at that depth,” she said.

According to the Nekton Maldives Mission, the volcanic subsea strata and fossilized carbonate reefs which form the base of Maldivian atolls combine steep vertical cliffs and shelving terraces which appear to cause the species to be prevented from diving any deeper as the sun rises.

They typically migrate from the deep sea to the surface at night and dive back down into the deep at dawn, otherwise known as The Vertical Migration - the largest nightly migration on Earth.

The trapped animals are targeted by large pelagic predators, including schools of tuna and sharks, along with well-known, large deep-water fish including the spiky oreo (named after the biscuit) and alfonsino.

“We’ve observed sharks in shallower waters quite extensively in the Maldives before, but for the first time we’ve have been able to document an immense diversity of sharks in the deep sea,” said Shafiya Naeem, Director General of the Maldives Marine Research Institute, which has partnered with Nekton on the expedition.

Marine ecosystems are defined by both the topography and ocean life.

“This has all the hallmarks of a distinct new ecosystem,” said Professor Alex Rogers who has spent over 30 hours underwater in the mission’s submersibles observing ‘The Trapping Zone’ during the expedition.

“The Trapping Zone is creating an oasis of life in the Maldives and it is highly likely to exist in other oceanic islands and also on the slopes of continents.”

The Nekton Maldives Mission said that while a trapping effect has been associated with the biodiversity hotspots on subsea mountains or seamounts, it has not previously been linked to the different geomorphology and biological parameters of oceanic islands, like the Maldives.

“Maldives, a coral atoll archipelagic nation is facing existential threat caused by human impacts and climate change.  For our very survival as a nation, we ought to look for science-based solutions that help us to mitigate and adapt to the disastrous effects of climate change,” said Maldivian Fisheries Minister Dr. Hussain Rasheed Hassan.

“The evolutionary history of this beautiful coral atoll nation is written as a record on the bedrock, deposits and the fauna of the deep. This Mission is shedding light on how we may use the science to survive as a nation.”

Analysis of the video and biological data collected by the Mission is ongoing in the Maldives, Nekton’s UK headquarters in Oxford and at partner laboratories.

The Mission believes the discovery could have important implications for other oceanic islands and the slopes of continents, sustainable fisheries management, the burial and storage of carbon and, ultimately, climate change mitigation.

The Nekton Maldives Mission set sail on September 4 and was at sea for 34 days. The mission successfully undertook the first systematic survey and sampling of Maldivian waters from the surface to depths of 1,000 meters. Almost nothing was previously known about what lay below 30 meters.

Previous Nekton missions have led to major scientific breakthroughs. Its expedition to Bermuda in 2016 confirmed the discovery of the Rariphotic Zone, or rare light zone, a new ecosystem found at depths between 120 meters and 300 meters.