Sinamale’ Bridge: The realization of a years-long dream, transforming Maldives 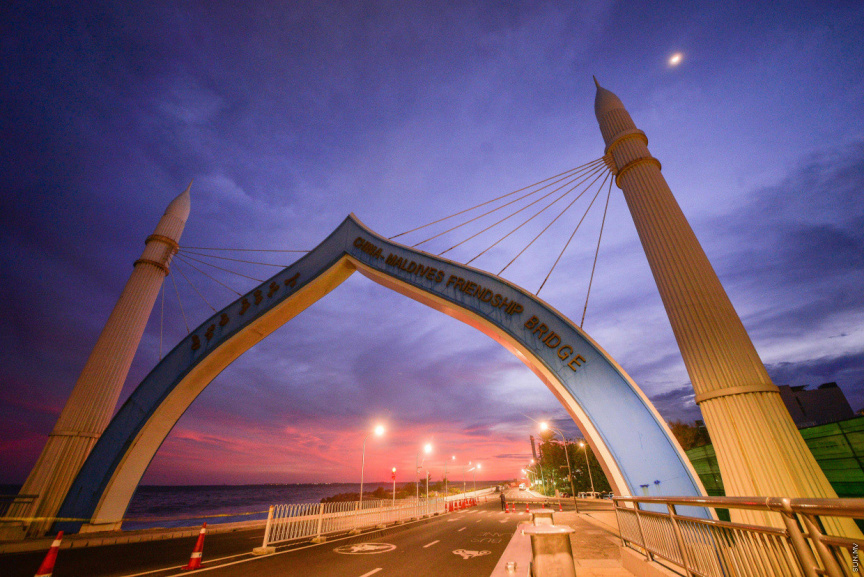 It is rumored that talks of building a bridge in Maldives dates back to the administration of Maldives’ first President, Mohamed Ameen. The talks came to the forefront again, during President Maumoon Abdul Gayoom’s administration. In 2008, Maumoon included the concept for a bridge between Male’ City and suburban Hulhule’, the home to the national airport, in his manifesto for the presidential elections.

During President Mohamed Nasheed’s administration, the Cabinet decided to build a bridge between Male’ and Hulhule’, to provide a sustainable solution to the country’s housing crisis. However, the plan was never implemented. And during President Dr. Mohamed Waheed Hassan Manik’s administration, discussions commenced with China’s Premier Wen Jiabao regarding the bridge project.

President Abdulla Yameen Abdul Gayoom faced the 2013 presidential elections with the goal of realizing his brother, Maumoon’s vision for a bridge, but with some changes. He wanted to connect Hulhumale' and Hulhule’ with a highway, and build a bridge between Male’ and Hulhumale’ – connecting all three islands. Yameen won the elections and pursued the goal – which would become his crowning achievement.

In September 2014, during Chinese President Xi Jinping’ state visit to Maldives, the Chinese side agreed to help build the bridge.

In July 9, 2015, Maldives and China commenced discussions on building a bridge between Male’ and Hulhumale’.

Three contractors were shortlisted, out of which CCCC Second Harbor Engineering was selected. The exchange letter between two countries was signed on November 8, 2015. The Implementation Agreement was signed on December 25, 2015.

Yameen named the bridge the ‘China-Maldives Friendship Bridge’, describing it as a symbol of the friendship between Maldives and China.

The bridge cost USD 200 million – covered through grant aid and a low-interest loan from China, and from Maldives’ state budget.

The bridge, known locally as the Sinamale’ Bridge, was officially opened on August 30, 2018. The project – completed in just under33 months – is the biggest infrastructure development project to be conducted in Maldives.

Speaking at the inauguration of the bridge as special envoy to Chinese President Xi Jinping, then-Chairman of China International Development Cooperation Agency, Wang Xiaotao said the bridge didn’t just connect two islands, but the hearts of the people of Maldives and China. The bridge was the site of wedding receptions and Maldives National University’s convocation shortly after it opened.

This year, Maldivians celebrates four years since the bridge opened, marking the realization of a years-long dream.

The bridge has transformed Maldives; greatly facilitating the daily life of its people and promoting social and economic development.