President returns to Male’ after tour of Bodu Thiladhunmathi 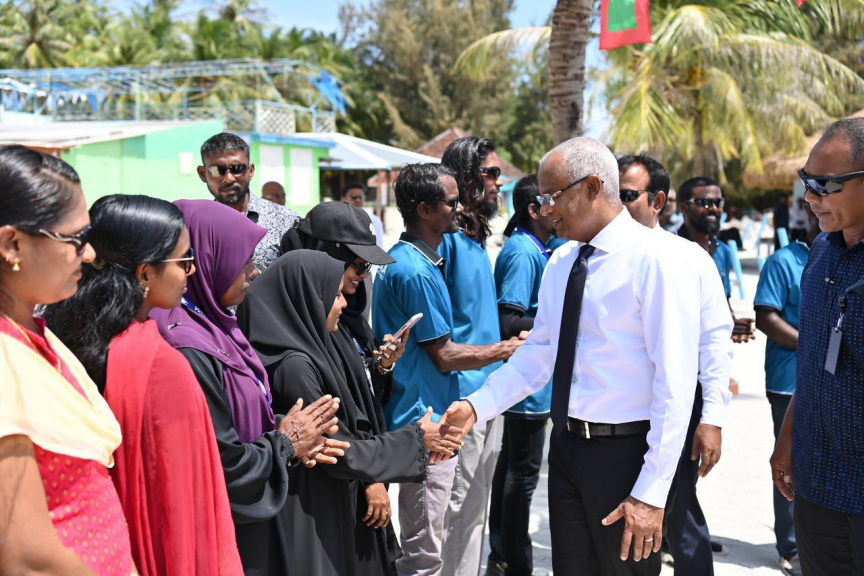 President Ibrahim Mohamed Solih concluded his visit to islands in the Bodu Thiladhunmathi region (HA. Atoll and HDh. Atoll), and returned to Male’ City on Wednesday.

His first stop was in Naivaadhoo on Monday morning. During his visit, the President inaugurated the newly-bult water network in the island, and met with members of the Naivaadhoo Council and Women’s Development Committee (WDC).

The President travelled to his next stop, Finey, on Monday afternoon. During the visit, he inaugurated the newly-built water and sewerage network, and new powerhouse and admin building of the powerhouse.

Following the inauguration ceremonies, the President met with members of the Finey Council and WDC. Discussions at the meeting focused on the developmental needs of the island.

He departed to Utheem on Monday night. He received a warm welcome and was hosted at a traditional banquet. He stayed overnight in Utheem, and attended the flag-raising ceremony to celebrate the National Day on Wednesday morning.

It was followed by the official ceremony to mark National Day, during which the President described Muhammad Thakurufaanu Al Auzam (Bodu Thakurufaanu) - who defeated the Portuguese occupation in in 1573, bringing an end to 15 years of brutal colonial rule – as Maldives’ permanent commander-in-chief.

The National Day is held to celebrate Bodu Thakurufaanu’s victory over the Portuguese occupation. This year, the official celebrations were held in Utheem, his birthplace.

Following official celebrations, the President opened a new powerhouse – built in Utheem after 24 years. Speaking at the ceremony, the President announced that funds would be allocated in next year’s budget to build a mosque in the island.

He traveled to his last stop in his tour, Dhidhdhoo, on Wednesday evening, in an RTL ferry.

He received a warm welcome upon arrival in Dhidhdhoo. The entire harbor was decorated with national flags.

In Dhidhdhoo, the President inaugurated the RTL ferry service in Bodu Thiladhunmathi region.

He stayed overnight, and met with members of the Dhidhdhoo Council and WDC on Wednesday morning. He also toured the island’s hospital and regional school.

In a press briefing, President’s spokesperson Miuvaan Mohamed said the projects inaugurated by the President during the tour will bring revolutionary changes to Bodu Thiladhunmathi region.

“When he met with members of the local council and women’s development committees of the four islands, he did not receive any complaints regarding lack of access to essential services. They now raise additional things that can be done for further development. Because this administration is working to improve access to essential services in all islands as a top priority,” he said.

Miuvaan said the administration will continue to listen to and serve the people.

The faces of the people of the four islands of Bodu Thiladhunmathi the President visited shined with happiness and excitement. Locals who spoke to Sun said the projects inaugurated in the islands offer an end to years of hardship.

Locals from Naivaadhoo who spoke to Sun described the establishment of the water system as a huge relief and an end to years of struggle to access clean water.

Locals from Finey who spoke to Sun said the establishment of a new powerhouse in the island after 18 years marked the fulfillment of essential services in the island.

Locals from Dhidhdhoo who spoke to Sun said the RTL ferry service in the region had made travel faster and cheaper. The trips that once cost MVR 400 now costs MVR 70-MVR 100, they said.

The President concluded his tour of Bodu Thiladhunmathi and returned to Male’ City on Wednesday afternoon.

It had followed a recent tour of islands in M. Atoll.