President: We have invested over MVR 970M in projects in HDh. Atoll 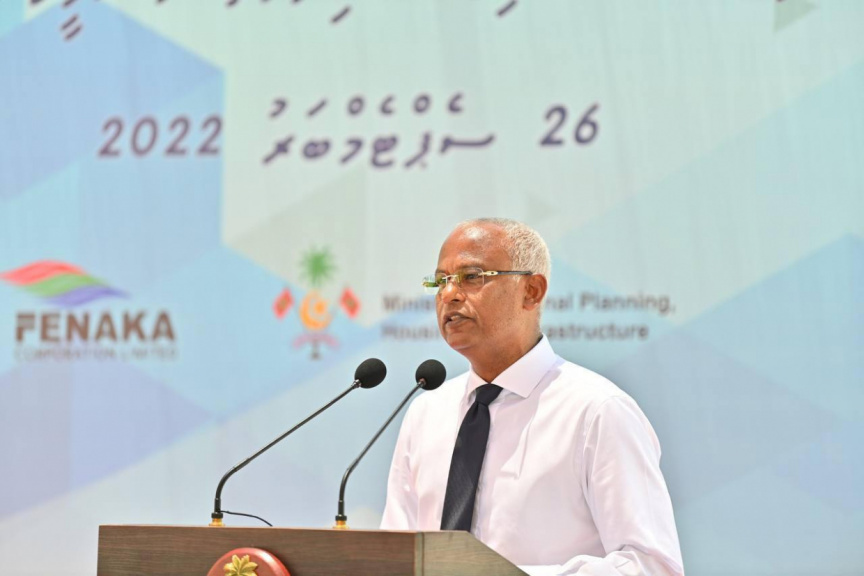 President Ibrahim Mohamed Solih speaks at the inauguration of the new water network in HDh. Naivaadhoo on September 26, 2022. (Photo/President's Office)

President Solih, who commenced a three-day tour of several islands in northern Maldives Monday, made the statement in a ceremony in his first stop - HDh. Naivaadhoo – to inaugurate the newly-established water network in the island.

Speaking at the ceremony, President Solih said his administration had invested over MVR 970 million in over 400 projects in HDh. Atoll alone.

He said the administration’s goal is to provide equal services in all islands, irrespective of the size of population.

“This administration came to power to provide services to the people without discrimination. And this is what we are doing,” he said.

“What Naivaadhoo residents want the most now is the development of the harbor. We will start the project soon,” he said.

After the ceremony, President Solih met with members of Naivaadhoo Council and Women’s Development Committee.

At the meeting, Naivaadhoo councilors thanked President Solih for the development projects in the island.

They also noted it was the first time for a Maldivian president to visit Naivaadhoo in 13 years.

The councilors said the residents of Naivaadhoo wished for the projects in progress in the island – such as the sewerage project and construction of an auditorium at the local school - to be expedited.

They also expressed concern over the run-down state of the council office building, and asked for the establishment of sports facilities for the island’s youth.