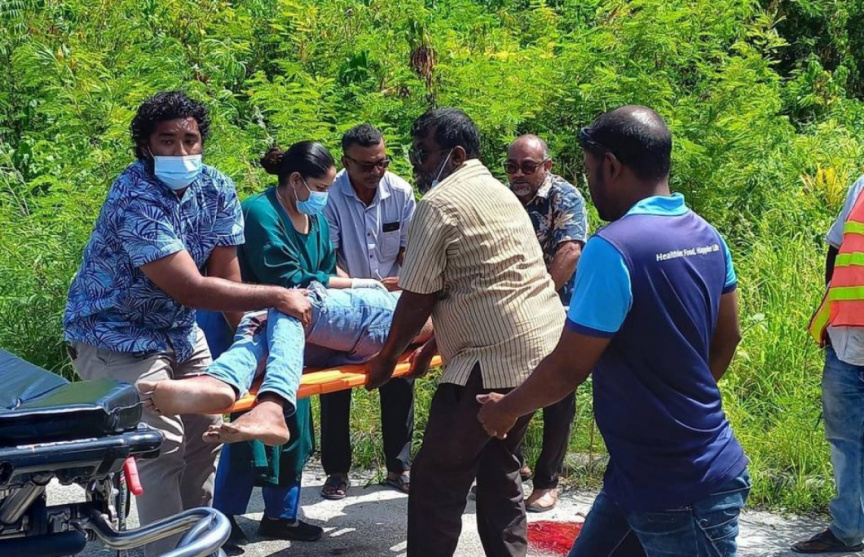 Pedestrian run over by a truck in Hithadhoo, Addu City, is transported to the hospital on September 7, 2022. (Photo/Thoha Yaseen)

The pedestrian who was run over by a truck in an accident in Addu City last week is on a ventilator, according to Indhira Gandhi Memorial Hospital (IGMH).

IGMH’s spokesperson told Sun on Sunday afternoon that the pedestrian, a 40-year-old man, is in serious condition, and is being treated in the hospital’s Intensive Care Unit (ICU).

He is breathing with the assistance of a ventilator, said the spokesperson.

The hospital declined to disclose any more information.

The accident took place in Hithadhoo at approximately 06:10 pm on Wednesday, September 7.

The victim was initially treated at the Addu Equatorial Hospital before he was transferred to IGMH in Male’ City.

The accident was caught on CCTV. The footage shows a male pedestrian walking on the side of the road, and a truck hitting him from behind and running him over.

A local from Hithadhoo who spoke to Sun said the man sustained critical injuries to his face, head, and other parts of his body, including his lungs.