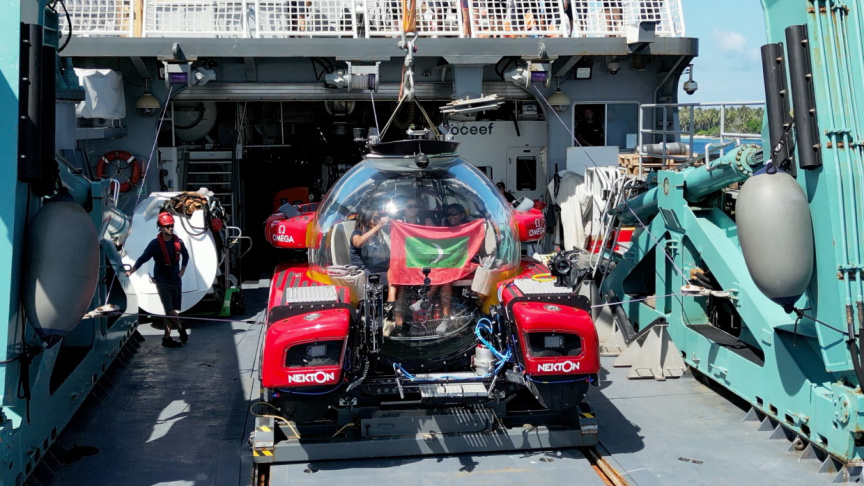 Two Maldivian women made history on Sunday, when they descended deep into the twilight zone as part of an international science mission, becoming the first people from the world’s lowest-lying nation to make the journey.

The expedition is a joint initiative by UK-based Nekton and the Maldivian government to map, sample and gather data on ocean health which can inform policymakers both in the Maldives and beyond, as the climate crisis deepens.

They waved the Maldivian national flag before descending into the waters in L. Atoll on the Omega Seamaster II submersible.

With no images, almost nothing is known about what lies beneath 50 meters, so the women and their eight colleagues literally entered uncharted waters.

The Maldives, a truly an island nation with 99 percent of its territory ocean and the one percent land, sits an average of 1.5 meters above sea level, opening it to a growing threat from the rising ocean.

At depths around 120 meters, the scientists expect to locate the old beach line from 20,000 years ago when sea levels rose following ice melt from the Last Glacial Maximum. Part of their mission is to investigate how ocean life has adapted to rising sea levels.

One of the highlights of the mission will be mapping and documenting life on the first seamount in the Northern Indian Ocean, descending down the underwater mountain’s flanks to 1,000 meters.

Of the 100,000 seamounts above 1,000 meters across the global ocean, only 300 have ever been biologically sampled.

Maldives’ 34 seamounts are often mentioned in local folklore, and provide critical breeding grounds for local fisheries such as tuna.

All-female aquanaut crew on mission to save Maldives

China and US in surprise joint climate agreement