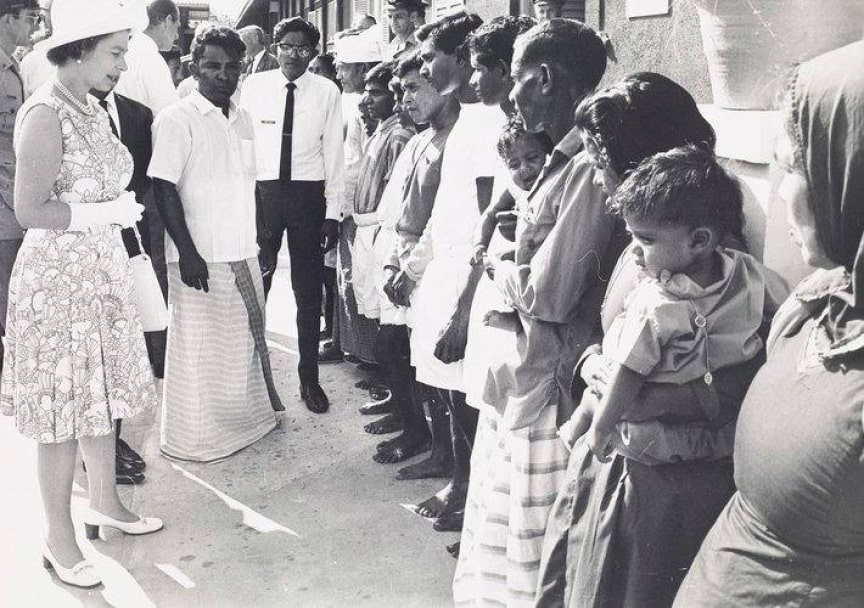 Queen Elizabeth II during her visit to Maldives on March 13, 1972.

The following article is written by Mohamed Farook regarding his experience as a young schoolboy meeting Queen Elizabeth II during her visit to Maldives in 1972.

It was 1971, and I was studying in the eighth grade of Majeediyya School when the government announced that Queen Elizabeth II of Britain would come to the Maldives on a state visit the following year. From then onwards, the people of Male’, the capital island, began frantically preparing for the royal visit. The gravel streets of Male’ were leveled, compacted, and the coarse white beach sand was spread to provide an aesthetic cover. The dark green moss on the street walls was washed away, and the walls were given a white coat of lime. Archways with pictures of the Queen and the Duke were built along the main roads. Banners and strings of flags were hung across the streets and along the walls, giving the entire island a new and festive look.

The school assigned our class to create a display of various corals for the royal visit. We brought the corals from the house reef of the nearby island of Funadhoo. The completed display was breathtaking. We arranged corals of different colors, sizes, and shapes to form a stunning coral garden. Beautiful seashells and preserved fishes were also placed among the corals to provide an authentic look.

We were all very proud of our work. When we finished the job after several days, I was sure it was worthy of royal inspection. But to our disappointment, when the government announced the program of the royal visit, we found out that the Queen would not visit our school, Majeediyya. Instead, it would be the Duke of Edinburgh who would visit our school. The Queen would call on the girls’ school, Aminiya. I was quite disappointed. I had really wanted to meet the Queen, not the Duke! But what could I do?

Opportunity found me the following Friday, as I visited my sisters, staying with some important people in Male’. The Head of the household was the former Chief Administrator of the Sultan’s Palace. His daughter, Moomina Haleem, was the Head of Nursing in the Government Hospital in Male’. While visiting the house, I expressed my disappointment that I would not get a chance to meet the Queen as she would not be visiting our school. Moomina overheard my conversation with my sisters and asked whether I would like to meet the Queen. I told her about the coral exhibition we worked so hard to complete and that I had hoped I would meet her. Moomina said that if I was keen, she could arrange for me to meet the Queen during her scheduled visit to the Government Hospital built with British aid. Moomina told me the Queen would come to the general ward and meet the patients, and if I posed as a patient, she would arrange for me to speak to the Queen. Naturally, I eagerly jumped at the chance and agreed to be a patient. However, she asked me not to share the plan with others.

The Queen arrived in the Maldives on 13 March 1972. As per the program, she visited the Government Hospital on 14 March. I had been admitted to the hospital the previous night. I was lying in bed in the general ward, nervous but excited, when the Queen, the Duke of Edinburgh, and other visitors came to the ward. It was Moomina who introduced me to the Queen. The Queen asked me how I was feeling. I told her that I had a terrible headache, doing my best to make it believable. Then the Queen asked the doctor (Dr. Mrs. Williams from Jaffna, Sri Lanka) about my condition, and the doctor informed her of the details of my case. The doctor, the Head of Nursing, and I acted out our parts quite well, if I may say so.

Then the visitors left. As gleeful as I was to have met the Queen, I was glad the facade was over, and I heaved a sigh of relief. But suddenly, the Duke turned back, came to me, and with a mischievous smile, said that the doctor was going to operate on me the following day. I knew he was pulling my leg. Little did he know that as soon as he left, I would leave my hospital bed and return home headache free!

Mohamed Farook wrote the above article on his experience meeting Queen Elizabeth II for a book on her visit to the Maldives. The late Ali Hussein of Novelty Printers and Publishers was working on this project when he passed away.